Humanism to be taught in Educate Together primary schools

Pupils to learn about the non-religious belief system humanism, atheism and agnosticism 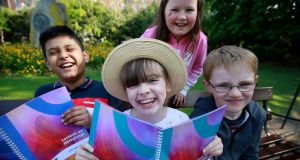 Mustakeem Shah (9), Theodora McDonnell (9), Zoe Brennan (9) and Fergus Linehan (9): the Humanist Association of Ireland together with Educate Together has launched humanism lesson plans for Educate Together schools. Photograph: Nick Bradshaw

Primary pupils in Educate Together schools are to receive lessons in humanism under a new initiative.

Educate Together, a non-denominational patron body which runs about 80 primary schools, and the Humanist Association of Ireland have produced lesson plans designed for pupils from first to fourth year.

It is the first time in Ireland that humanism is being included as part of a school curriculum.

Humanism is a non-religious belief system that relies on science and reasoning to understand the universe.

The lessons, which have been in development since 2015, are also available to any interested national schools throughout the country.

Paul Rowe, chief executive of Educate Together, said it was a “groundbreaking” development which recognised the diverse world today’s children are growing up in.

“These lesson plans will go a long way towards addressing this need. They will also help to affirm the identity of schoolchildren from family backgrounds reflecting these philosophical outlooks.”

Philip Byers of the Humanist Association of Ireland said the fact that one in 10 Irish citizens now claims to be non-religious underlined the need for differing beliefs to be at the heart of the education system.

“These lesson plans address humanism in a matter-of-fact way and were developed in order to enhance children’s confidence in engaging with differing world views and religious beliefs,” he said.

All schools are required to set aside up to half an hour a day for religion or “patron’s programmes”.

Unlike most primary schools, Educate Together does not provide faith formation classes during the school day.

Instead, it offers an “ethical education” curriculum which encompasses learning about religions, belief systems, equality, justice and the environment.

The new lesson plans may form part of the “belief systems” strand of this curriculum which is taught in Educate Together’s 80-plus primary schools .

In all, there are about 20 lesson plans prepared for primary school students which would be spread over a four-year period between first and fourth class.

The Humanist association describes itself as a community of people who believe in humanist principles and aspire to a fair, balanced, ethical and responsible secular society.

It says it campaigns for the equal treatment of people of no religion by the State and provides a forum for people to meet, share experiences and develop their humanist ideals in an informal, friendly, and inclusive environment.

Lesson plans can be downloaded at: www.educatetogether.ie/humanism-lessons