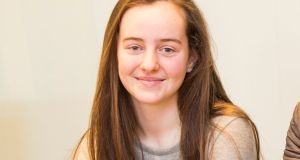 Tara O’Sullivan, a Junior Cert student whose campaign to extend the time allocated for this summer’s English exam has attracted thousands of supporters. 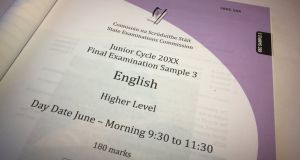 A sample paper of the new junior cycle English exam.

A student who started an online campaign to persuade authorities to extend the Junior Cert English exam by 30 minutes has attracted thousands of supporters within days.

Tara O’Sullivan (15) began the initiative after she and other students at her Dublin school found they were not able to complete a mock two-hour exam based on the new curriculum. After posting a petition online, she quickly realised that thousands of students in other schools had the same problem.

“I found it impossible to finish,” she said. “It was like a competition to see how fast you can write instead of an actual test of your knowledge. We’re stressed enough as it is, but it was ridiculous.”

“The campaign shows that thousands of students feel the same. There are lots of teachers who aren’t happy either. They need to listen to us.”

The petition, posted on Change.org in recent days, calls on the State Examinations Commission to “make the exam fairer by adding 30 extra minutes.

By Tuesday evening, it had attracted almost 8,000 signatures.

English is the first subject to be rolled out under new junior-cycle reforms, which seek to provide a broader assessment of students’ skills. The curriculum includes two classroom-based assessments, an assessment task worth 10 per cent, and a final written exam worth 90 per cent of marks. This contrasts with the old Junior Cert English exam which was made up of two written exams, both of which were 2½ hours long.

The State Examinations Commission was not in a position to comment last night, though sources say mock exam papers are drawn up by private companies.

Ms O’Sullivan said that while questions in the official sample paper and mock exams were at a “fair/doable” level, all students she had spoken to agreed the timing was “ridiculous”.

“Lots of students who faced this exam did not finish the paper and those who did had no time to assess and adjust their answers before having to hand up the paper,” she said. “To give students the opportunity to express their thoughts and analysis as eloquently as expected, more time is necessary.”

She said her teachers have also expressed frustration on behalf of students but they seem to have been ignored.

“As a future young voter I am disappointed by how little effect the dissatisfaction of students and teachers is having on the decisions being made by both the State Examinations Commission, the National Council for Curriculum and Assessment and in the Dáil itself.