Tech may be trendy, but engineering is essential 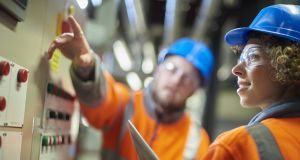 Ireland’s engineering industry is a central pillar of the economy, worth tens of billions every year. Photograph: iStock

There’s an interesting study that suggests more superficially attractive species of endangered animals, like the giant panda, attract more research and conservation funding than less attractive but equally endangered ones, like the Cuban crocodile.

A parallel can be perhaps drawn with Stem education in Ireland, the field of subjects concerned with the sciences, technology, engineering and mathematics upon which the world’s most innovative businesses and industries are founded.

In Ireland, we’ve placed a great deal of emphasis on the “t” in Stem: technology. It’s hardly surprising: tech is popular and trendy.

Engineering, on the other hand lacks a similar glamour, and as a result the “e” in Stem may be overlooked by the public and policymakers, much like the Cuban crocodile.

It shouldn’t. Ireland’s engineering industry is a central pillar of the economy, worth tens of billions of euro every year.

It’s a broad church incorporating the likes of civil engineers, computer engineers, design engineers and process engineers working to design and build the bridges, data centres and products of tomorrow.

We’re also a hub for specialist fields, particularly the medical devices, or the global “medtech”, sector.

In 2014-2015, more than 2,000 jobs were created by the medtech sector and almost €1 billion was pumped into valuable research, development and manufacturing expansion.

Put into real product terms, a third of the world’s contact lenses are made on Irish soil, while a quarter of the world’s diabetic population rely on injection devices produced here.

Despite this, Ireland is heading towards a skills shortage, and like software developers and programmers, engineers of all disciplines are in great demand. We need to bring this shortage under control now to ensure companies nationwide don’t look elsewhere for talent and to ensure Ireland continues to be attractive as an investment prospect.

We are taking very positive steps. The Government’s action plan for education, which seeks to make Ireland’s education and training institutions the best in Europe by 2026, is to be wholeheartedly welcomed.

In particular, its ambition to increase the number of students undertaking work placements as part of their third-level qualification is a progressive step. Furthermore, placing increased emphasis on engineering apprenticeships, which dropped off a cliff in the recession years, is vital as hands-on experience is a huge benefit for those starting their careers.

The action plan’s introduction of computer science to the Leaving Cert curriculum is especially good news for Ireland’s tech sector, but we cannot afford to rest on our laurels and neglect other Stem fields. Third-level engineering courses can, on occasion, suffer from high drop-out rates (25 per cent on average according to the Higher Education Authority). We could address this by introducing measures to better prepare school pupils for the rigours of a technical undergraduate course in second level.

Engineering is already on the Leaving Cert curriculum, and about 5,000 pupils nationally sit the exam every year. Industries that depend on engineers must help increase this number.

The onus is also on educators and the Government to help spread the subject to schools across Ireland, modernise the syllabus, and provide the resources and support necessary to make the course worthwhile, especially for prospective undergrads.

The recently published expert report, Stem Education in the Irish School System, is a positive step in this direction.

Outlined in the report are specific steps which will improve marketing of subjects such as engineering by making students and parents more aware of the job opportunities which are available.

Aside from Ireland’s long-term growth, the immediate reality of Brexit should put these issues into focus.

As major multinational companies, including those in the engineering sector, weigh up the pros and cons of remaining and investing in a non-EU country, Ireland should be doing everything in its power to make the prospect of setting up shop here as enticing as possible – that means demonstrating that we have a Stem-capable workforce that is ready to meet the needs of the world’s rapidly evolving high-tech economy.