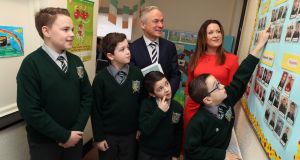 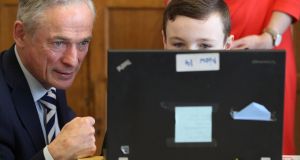 Schoolchildren at primary level have reached targets for reading and maths performance four years ahead of target.

The achievement has prompted Minister for Education Richard Bruton to set new and more ambitious targets – particularly in the area of maths – by the end of the decade.

An interim review of the national literacy and numeracy strategy (2011-2020) shows all targets set for reading and maths at primary level have been reached.

Significant progress has also been made at second level towards achieving 2020 targets. Mr Bruton said the performance was a tribute to the work of teachers, school leaders and teacher educators in the teeth of the recession when funding for the public sector was under major strain.

“It really does show that people have stepped up to the plate in the education system,” he said. “Reading and writing are the basic building blocks of any education system. We have the ambition to be the best in Europe. We’re setting about that.”

While Ireland has ranked towards the very top tier internationally in literacy and science, our performance has lagged further behind in maths.

Mr Bruton said there was room for improvement in the area of numeracy through upskilling maths teachers and the introduction of coding and computer science throughout the school curriculum.

The Minister was speaking during a visit to Francis Street CBS in Dublin’s south inner city, where he said teachers were already embracing many of the approaches he hoped to foster across other schools.

“They’ve demonstrated what’s necessary: you do have to look at teaching methods, and be continually innovating and trying to make them relevant to pupils, trying to involve parents,” Mr Bruton said.

The revised plan contains specific targets for literacy and numeracy within disadvantaged schools for the first time. For example, it aims to increase the proportion of sixth-class pupils performing at the highest levels of maths by 42 per cent in the most disadvantaged schools.

This, he said, would be underpinned by a new plan to give greater supports to disadvantaged schools which will see €15 million extra being invested in teaching support. There will also be an increased emphasis on higher-achieving students and on enhancing the digital literacy skills of pupils.

Separately, Mr Bruton has acknowledged that pupils in deprived areas who are not included in a support scheme for disadvantaged schools may face greater levels of deprivation than schools in the scheme.

The anomaly is linked to the Government’s decision to protect schools which have had “Deis” status, alongside the introduction of a new evidence-based tool to identify the most disadvantaged schools. Under the old system, school principals could make the case as to why their school needed support.

The new system uses a series of indicators – based on the Pobal HP deprivation index – to objectively identify schools which require support based on the addresses of students.

Mr Bruton said that while 79 disadvantaged new schools have been added to the Deis scheme under the new criteria, he accepted that some schools in the scheme may be less disadvantaged that those outside it.

A spokesman confirmed in a statement that no schools currently in the Deis scheme would be immediately affected in terms of the phasing-out of supports.

“In the event that this further analysis concludes that the level of disadvantage within some schools inside is less than that of some schools outside of Deis, this would have to be considered in the context of finite resources,” the spokesman said.