Why one of Ireland’s most famous schools is going Gaelscoil 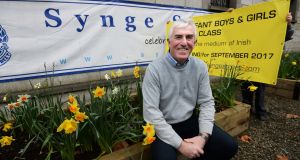 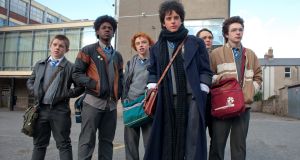 It’s one of Ireland’s best-known schools, with an impressive roll call of past pupils such as Gay Byrne, Eddie Jordan, Eamonn Andrews and former president, Cearbhail Ó Dálaigh. It’s such a part of Irish culture, it even had a hit movie made about it.

Now the primary school of Dublin’s Synge Street is going gaelscoil – because all-Irish schools are what parents of children in the city centre want most.

Currently, Synge Street primary is an all-boys Catholic school that accepts children from second class up to sixth class.

But from September, it will introduce a new stream of co-ed pupils, starting at junior infants level, with pupils learning only through Irish.

This gaelscoil stream – or “sruth” – of boys and girls will run alongside, but separate from, the boys-only classes learning through English.

But the classes will be divided, even at break-times, to ensure the Irish-language students get full immersion in the language.

Principal Gerard Mooney says the introduction of the Irish stream is a unique development – Synge Street is the first school Ireland to do it.

He explains that the idea came about due to a combination of dramatic depopulation in Dublin city centre, combined with increased demand for all-Irish education.

“We’re taking an infant class this year for the first time, and they will learn through Irish. This is a unique approach in Ireland.

“Depopulation in the south inner city has resulted in a significant drop in school numbers.

“One-third of our school population was from local areas that have been savagely depopulated and there are no plans to rebuild or regenerate. Prohibitively high rents have driven a lot of families out of the area.

“The demographic completely changed, due to the cost of houses and rent increases. It is very unfair on families.”

Synge Street primary – Sancta Maria - is a Catholic school that is part of the Edmund Rice Schools Trust. One of the tenets of its ethos is to reach out to needs in the community.

Mooney says the introduction of the sruth is in keeping with that principle.

“We are responding to the needs of the community. There are many parents in the area who want to educate their children through the medium of Irish, but the local gaelscoileanna in Harold’s Cross and Ranelagh were over-subscribed and they were disappointed.

“We did the research and found there was a significant need for a gaelscoil and we said: Let’s try this.”

With gaelscoileanna regarded as the school of choice for the elite, is the development a sign of changing times in the “city end” of Dublin 8?

Catchment areas like Portobello and the Tenters are increasingly middle-class enclaves.

Only high-earning couples with children can afford to live there. Is this what’s driving the change?

Mooney is aware it is a factor – but says what local parents really wanted was a mixed school that started at junior infant level.

Synge Street primary had been hand-tied by traditional church rules that meant the boys started only from second class onwards.

Prior to second class, pupils attend local convents for junior school up to first class, and then switch over to Synge Street.

But many parents were averse to the idea of moving kids from one school to another once they’d got settled. Others aren’t keen on single-sex education.

The middle-class preference for their little ones to be educated as gaeilge is just one aspect.

Mooney says of the driving force: “Every society has its microcosms. I’d say it’s 50/50. Half was those who wanted a gaelscoil and half who wanted a mixed school starting from junior infants.

“We had been restricted by the second- to sixth-class model that history and politics dictated, and we had to change the status of the school [to introduce the gaelscoil stream].

“There is a sense of resurgence of national identity, and the 1916 centenary had a big influence. It has broadened into a pride of language and has cast off some of our old attitudes. Parents want their children to be aware of their cultural heritage.

“The bonus of learning a second language early on is that it bumps up cognitive ability. People are prepared to go the extra mile for their children to have a good education.”

When the new junior infants arrive at Synge Street gates for the first time this September, it will be the result of Trojan work by Principal Mooney and the school.

“We are two years now getting to the point where we can offer this new stream to parents.

“First, I had to convince the Archbishop [Diarmuid Martin] and he supported us when he saw there was a crying need for branching out, while also supporting the needs of parents.

“Then we had to convince the Department of Education. We’re making the conversions and putting the facilities for it in place now.”

The maximum number of students in a class is 28, and with just over a month left until enrolment closes, the gaelscoil class is almost full.

Meanwhile in Synge Street boys-only primary, there is an average of only 12 boys per year.

Once one of the biggest schools on the city’s south side, the school, founded in 1864, educated broadcaster Mike Murphy, actor David Kelly, writer Flann O’Brien, oncologist John Crown and politician Liam Cosgrave.

There are now 60 students in the primary school, where in decades past, there were hundreds.

SING STREET VS SYNGE STREET: A HOLLYWOOD VERSION OF REALITY

It featured Aiden Gillen and Jack Reynor, as well as newcomers Ferdia Walsh-Peelo and Lucy Boynton.

It was a feel-good fictitious tale that was part-based on Carney’s time as a student in the secondary school back in the 1980s.

The movie was nominated for a Golden Globe and portrayed Synge Street as a school where the kids were rough and the teachers were even rougher.

So: was it a good thing or a bad thing for the historic Christian Brothers school, which is over 150 years old?

The primary school principal Gerard Mooney takes it for what it is – a Hollywood version of reality.

“It was grand, it was good craic. People have to understand that you must allow for licence. Never let the facts get in the way of a good story!” says Mooney.

“You just suspend disbelief and enjoy it as it is. There is a good part of the movie that is cultural memory and cultural stereotype.

“I see the men here retired and living in the house beside us and they are a different body of men you see personified in the movie.

“But it was good, we were delighted with it – and it’s an honour to have our very own movie. Mount Temple, where U2 went, didn’t get a movie – but Synge Street did!”