Income data for thousands of students receiving grants is ‘incomplete’ 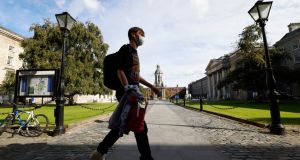 The RCSI, UCD and Trinity College have the lowest proportion of students on Susi grants with between 5 and 25 per cent entitled to grant assistance. Photograph: Alan Betson/The Irish Times

Insufficient data is being collected to determine the full income of thousands of students who are in receipt of third level grants, according to a new spending review.

A report by the Department of Public Expenditure shows the State is spending about €360 million per year to a total of 77,000 students in further and higher education.

About half of all 18 and 19 year olds in higher and further education receive some form of grant aid.

The gross median household income for students in this age category is just over €62,000.

The review notes that the Susi income assessment process excludes non-recurring sources of income such as overtime payments and excludes the value of any assets, which is assessed as means in many other government supports.

“As a result the data on the income of Susi recipients is somewhat incomplete,” the review states.

“Analysis of other sources of income excluded from the income assessment, as well as asset value, would allow for a more comprehensive profile of the income of Susi recipients.”

The review also notes there are sharp differences in the proportion of grant-holders enrolled in third level colleges.

The RCSI, UCD and Trinity College have the lowest proportion of students on Susi grants with between 5 and 25 per cent entitled to grant assistance.

By contrast, Letterkenny IT, Sligo IT and Limerick IT had the highest proportion with between 60 and 65 per cent in receipt of grants.

Over half of students at institutes of technology receive Susi grants compared to about one third of students studying in universities.

Susi grants are paid to about 77,000 students in further and higher education who meet the eligibility criteria.

The gross median household income of a Susi recipient is just under €49,000.

A detailed breakdown of the figures show that half of all 18 and 19 year olds in higher and further education receive a grant.

This gross median household income for these students is just over €62,000.

About a third of these students who receive the highest rate of support are households in which there is no income from employment/self-employment.

Susi recipients reflect the gender breakdown of the wider higher and further education population, with more female than male recipients.

Counties such as Cavan, Donegal, Longford, Mayo, Monaghan and Wexford received the highest proportion of students on the higher level of support.

The report says there is limited data in relation to the economic occupation and education of Susi recipients’ parents, as well as information on the academic and labour market outcomes of Susi recipients, including drop-out rates and future earnings.

It also says there is a lack of data available of the field of study of Post-Leaving Cert and postgraduate recipients.

“This data would allow for a fuller exploration in relation to issues of social mobility such as whether Susi grants are supporting students from lower educated backgrounds to pursue higher/further education,” it states.

However, a higher proportion of Susi recipients are studying ordinary bachelor degrees when compared to the overall student population.

The fields of study with the highest share of grant recipients are arts and humanities, business, admin and law, health and welfare, and natural sciences.