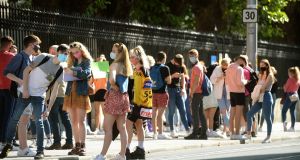 So, exactly how many students have now been affected by errors in grades?

A total of 6,100 Leaving Cert students across 610 schools will get upgrades on the basis that they received lower grades than they should have due to errors.

Most of these students (5,408) will receive a higher grade by a single grade band in a single subject. This is equivalent to 10 CAO points in a higher level subject.

Did some students also receive higher grades than they should have?

In response to queries, the Department of Education said on Sunday night that about 7,943 higher Leaving Cert grades were issued in error.

Students with these higher grades will not be downgraded on the basis that it is established practice that exam candidates are not penalised for such errors.

However, the disclosure of the volume of these grades issued in error will likely spark controversy among students who fear they were unfairly squeezed out of their chosen CAO course by others with inflated grades.

Solidarity TD Mick Barry, for example, has called on the Minister for Education to disclose how many students may have lost out on college places due to higher grades issued in error.

How many students will get new CAO offers on foot of upgrades?

It’s hard to say for sure, but the numbers are likely to range from anywhere between a few hundred to up to 1,000, according to sources.

The department sent a corrected file of students’ results to the CAO on Saturday afternoon. The CAO will now establish how many students are eligible to receive a new offer.

The first indication of this is likely on Monday, and students are likely to receive formal offers later in the week.

The Department of Higher Education will work with the CAO and higher education institutions to see how these students can be facilitated to commence the course that they would, in other circumstances, have been offered in an earlier round.

While every effort will be made to ensure such students can take up new offers in the current academic year, sources say it may not prove possible in some very high-demand courses such as medicine and dentistry, which are at full capacity.

Any student who has applied to a higher education institution outside the State who believes their grade change will impact on those arrangements has been advised to contact the relevant institution in the first instance.

How many errors were spotted in total?

We now know of a total of four errors or discrepancies in the coding used during the calculated grades process.

Two errors were discovered almost a fortnight ago in coding provided by Polymetrika International Inc, a Canadian company, according to the department.

Two further discrepancies were discovered by an independent US firm, ETS Educational Testing Service, which reviewed a sample of the coding.

How did these errors impact on students’ results?

The first error was in a line of code programmed by Polymetrika, and affected the way in which candidates’ Junior Cycle results were used in the standardisation process.

It was intended that students’ aggregate Junior Cycle results in Irish, English and Maths would be included in the data used by the standardisation process, together with their two best other subjects.

This was aimed at building a picture on the likely performance of an individual class in the Leaving Cert.

However, the error meant that students’ results in their two weakest subjects ended up being used.

As a result, in some subjects, students received calculated grades that were lower than they should have been.

A second error also related to the Junior Cycle was discovered by the department, involving the use of results for a subject – Civic, Social and Political Education (CSPE) – that were not supposed to have been used in the first place.

Following checks in the past week by ETS, two further errors were spotted.

ETS found that in cases where data was missing for students’ Junior Cycle results in either maths, English or Irish, it was incorrectly replaced with the highest test score on any other subject.

Secondly, it found that the algorithm used to treat extreme/outlier students in each school did not exactly match what was described in a technical report produced by the department.

However, ETS said this second issue would not have had a meaningful impact on results.

Could there be further errors?

The work of ETS involved an audit of a sampling of the coding, rather than the entire coding used.

This may well prompt further Opposition calls for a full, comprehensive audit to determine whether there are further errors.

Why was just a sample of coding reviewed?

In a statement ETS said it and the department recognised that the task needed to be completed in a very short timeframe, and “necessarily involved an audit of a sampling of the coding rather than a full audit of the entire coding”.

In sampling the coding, it said the department and ETS agreed that “certain areas of coding should be prioritised within the available timeframe”.

Are there any legal consequences?

There are already a number of legal actions pending from students in relation to the calculated grades process. Legal sources say this could prompt further claims.

When asked at the weekend whether further litigation was a possibility, Minister Foley told reporters: “I think anything could be a possibility.”

What’s likely to happen next?

The focus now is on ensuring that students receive the grades they were due and that they will have an opportunity to take up higher preference offers, where applicable, through the CAO system.

Students also have the option of sitting the postponed Leaving Cert exams from November 16th to December 11th. The deadline to apply has been extended to 5pm next Wednesday. The State Examinations Commission has said any student who receives a higher offer can withdraw their application to sit the exams by emailing November2020@examinations.ie

There are still unanswered questions, meanwhile, such as whether the errors meant some students may have lost out on CAO courses due to other students receiving higher offers.