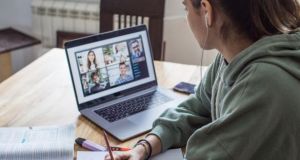 Many second-level students in Irish schools lack access to digital devices or an effective online learning platform, according to new data. Image: iStock.

Many second-level students in Irish schools lack access to digital devices or an effective online learning platform, according to new data.

An international report shows significant disparities between schools in Ireland compared to other developed nations in terms of digital infrastructure, which has become increasingly important during the Covid-19 pandemic.

The findings are contained in a OECD Pisa report on school policies and practices which is based on contributions gathered from 600,000 15-year-old students in 79 countries in 2018.

Almost half (45 per cent) of Irish students attended schools where the principal reported that the school’s capacity to teach was hindered by a lack of teaching staff. This is well above the OECD average of 27 per cent.

Students in Irish schools were also more likely than those in other OECD countries to attend schools where poor quality physical ininfrastructure - such as buildings, grounds, heating, lighting and acoustics - impacted on the quality of instruction.

The report also provides data on schools’ digital infrastructure which indicates that students in Ireland are less well-served than pupils in other developed countries.

On a positive note, school broadband speeds in Irish schools were deemed sufficient in most cases (76 per cent), above the OECD average of 66 per cent.

However, less than half (45 per cent) of Irish students were in schools where the principal reported that an effective online learning support platform was available, below the OECD average of 54 per cent.

More than half (57 per cent) of Irish students were in schools where the principal agreed that the number of digital devices connected to the internet was sufficient, below the OECD average of 67 per cent.

Pisa findings published last year indicate that, despite these issues, Irish 15-year-olds are among the top performers in the world in reading literacy and perform above the average in science and maths.

Teachers’ unions said the findings highlight the need to invest more in the education system.

Michael Gillespie, general secretary of the Teachers’ Union of Ireland (TUI), said Irish teachers had managed to deliver a “first-class education service to learners of all abilities despite the public education system being chronically under-resourced by international standards”.

Association of Secondary Teachers Ireland (ASTI) president Ann Piggott said the Government must prioritise funding for education in next month’s October budget to upgrade school buildings and ensure every school has the capacity to revert to partial or full remote learning during the pandemic.

The Department of Education has previously pointed out that investment in education has risen to record levels. It has said that class sizes have fallen to a historic low at primary level and investment is increasing across the board in the education sector.

Government sources say the use of GDP to measure investment in education is distorted by the scale of multi-national companies in Ireland compared to other countries.