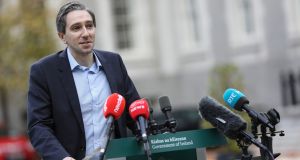 Minister for Higher Education Simon Harris TD and the CAO held a meeting on Monday to discuss the number of places which are likely to be required for upgraded students.

Up to 450 new CAO offers will be issued on Thursday to students whose Leaving Cert results were upgraded following errors in the calculated grades process.

The numbers of students who will secure a higher CAO preference this week represents about 7 per cent of the 6,100 Leaving Cert students whose results were upgraded on foot of coding errors discovered in the past fortnight.

Minister for Higher Education Simon Harris and the CAO held a meeting earlier on Monday to discuss the number of places which are likely to be required.

The new offers are to be issued online at 10am on Thursday and the additional college places will be spread across higher education institutions. There is optimism that all students eligible for a new offer will be able to take up their course in the current academic year, with relatively few offers due in very high-demand courses such as medicine or dentistry.

One source familiar with the revised offers said many of the new places will be in education and teaching courses, especially at primary level. As many as 100 CAO offers alone will be for courses at Technological University Dublin.

The CAO is likely to issue a statement later today, while the Higher Education Authority is working with third-level colleges to ensure they can add capacity to existing courses.

The Irish Times reported on Monday that almost 8,000 Leaving Cert grades issued this year were higher than they should have been due to coding errors in the calculated grades process. Students with these higher grades will not be downgraded on the basis that it is established practice that exam candidates are not penalised for such errors. However, the disclosure of the volume of higher grades issued in error has sparked controversy among students who fear they were unfairly squeezed out of their chosen CAO course by others with inflated grades.

However there is reluctance within Government to go down this route on the basis that it risks reopening the CAO process.

The Department of Education’s chief inspector Harold Hislop said at the weekend that the number of students affected was “probably quite small” because of the increase in college places this year. He said the only way to identify this group is to “re-run the CAO system from the beginning”.

Meanwhile, it has emerged that an independent review of errors in the calculated grading process, which led to thousands of students receiving the wrong results, focused only on a sample of coding used in the process. The disclosure has prompted calls from the Labour Party for a comprehensive and independent inquiry to establish if there are further errors which may affect other students.

The department confirmed that US firm ETS has been commissioned to review “aspects of the code”, in order to provide reassurance that the model was operating as intended. The spokeswoman said the department and the Minister had committed to a comprehensive review of the calculated grades process when the process was completed.

Labour’s spokesman for education Aodhán Ó Ríordáin said the fact that this review covered a sample of the code underlined the need for a comprehensive inquiry.

“What’s really concerning is that we are still nowhere close to finding out the full picture of what went wrong and how many students are affected,” he said.

“Now, we’ve found out that there were multiple errors in just a sample of the code. This is a sorry mess.”