How to stay ahead at work: the rise of remote learning

Technology is allowing employees to upskill without setting foot on campus 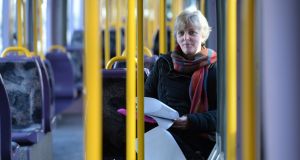 Ann Hayes, who studies on her commute into work, is one of a rising number of employees who are upskilling through remote learning. Photo: Dara Mac Dónaill

During Ann Hayes’s hour-long commute to work on the Luas, most people are hunched over their smartphones or staring vacantly out the windows.

She, on the other hand, is nose-deep in textbooks and notes as she studies for her business studies degree at UCD.

Hayes, though, is not going to college – at least in the strict sense of the word. She squeezes her study in between her work as a project manager for data protection in a city-centre company and her family commitments.

Full-time study wasn’t an option. It’s all about going to work, earning money and keeping the show on the road

“Full-time study wasn’t an option. It’s all about going to work, earning money and keeping the show on the road,” says Hayes, a 46-year-old mother-of-three.

“My typical working day begins at 6.30am and I arrive home after 7.30pm so I know that I would be able to study in the evenings. Blended learning, though, allows me to have a good work/life balance.”

Hayes is one of a growing number of people who are returning to education mid-way through their careers to upskill or reskill entirely.

Technology is making it much easier to study for anything ranging from a certificates to master’s degrees at college.

Most experts believe this will be one of the biggest growth areas in education over the coming years due to rapid changes in the workplace and technological disruption.

Indeed, it is already happening. Figures compiled by the Higher Education Authority show there has been a increase of almost 60 per cent in numbers engaged in various forms of off-campus or remote learning between 2012 and 2016, up from 3,821 to 6,015 students.

Private colleges have moved to scale-up courses in this sector at an even faster rate.

Greg O’Brien, an educational technologist at Griffith with over 15 years’ experience in distance and blended learning, says students increasingly expect this approach on their path to achieving learning and accreditation.

The college has been offering its three-year LLB law degree by blended e-learning for the past four years, as well as through traditional methods. In that time, it has seen a different landscape of learning.

“Students come to campus for induction. Legal courses are watched as online videos, weekly in students’ own time, and tutorials are conducted live via video tech, every week with your colleagues, and your lecturer,” he says.

“These are lively and engaging sessions, where the subject of the lecturer’s previous recording can be explored to greater depth.”

This virtual space is inhabited by highly motivated students, from around the country, reviewing lectures and interacting with each other

This, he says, is complimented by online resources, videos and interactive forums through Griffith’s virtual e-learning environment.

“This virtual space is inhabited by highly motivated students, from around the country, reviewing lectures and interacting with each other. It’s perhaps not surprising that often our busiest period in this environment is after 10pm,” he says.

There are, of course, drawbacks to virtual learning: the lack of face-to-face student-teacher relationships is just one. Students can also be deprived of the kind of peer support they might receive on campus.

Dr Orna O’Brien, director of the UCD’s centre for distance learning at its college of business, says it is responding by offering remote learners different kinds of supports.

“Each student, for example, is provided with a learning support officer, who is a ‘one stop shop’ for all their academic and administrative queries,” she says.

“Online moderators are qualified to at least postgraduate level in their business discipline and are a high quality support. UCD also uses Blackboard as a virtual learning environment, providing an engagement platform to support students.”

The rise of remote and lifelong learning, says James O’Connor, managing director of Microsoft International Operations, are a reminder that the days when a person’s education ended at the “gate of the university and the world of work” are over.

He says Irish businesses and employees need to focus more on lifelong education to adapt to a world where automation and technology are changing how we work.

However, O’Connor – who is also president of the American Chamber of Commerce Ireland – has warned that Ireland is lagging behind the rest of the European Union in the numbers of employees who are taking part in education programmes during their careers.

“The world of work is changing at a speed that makes it nearly impossible to turn out graduates with every imaginable skill required to excel in the modern business environment,” he said.

“Our member companies, who I believe are central to this, recognise the value of bringing the individual on the journey with them, facilitating them in a lifelong learning programme that helps them to upskill and anticipate and be ready for the next challenge.”

Ireland’s overall performance in lifelong learning is relatively poor with a participation rate of 7 per cent, compared to an EU average of 11 per cent.

US multinationals based in Ireland seem to be ahead of the curve, with most involved in some form of talent development activity.

We are all upskilling. We’re in jobs where we have serious experience, but in order to progress it’s important to do this

“We must recognise that much of the talent we need in five and 10 years’ time is already in the workplace.

“We are of the view that lifelong learning is of significant value to employees and will be of even greater value in the future as their career paths take them through a range of business sectors with constantly evolving skills needs.”

O’Connor said an approach which involves the individual, the State, the employer and education providers is needed to raise life-long learning participation rates as economic development and technological progress continues at speed.

These opportunities, he said, included expanding learning opportunities and recognising prior learning at work across all levels of education.

The acquisition of digital skills across society in general, but among school leavers in particular, was also vital to maximise engagement with the modern economy, he said.

There should also be an examination of the role of individual financial incentives to raise the uptake of learning opportunities, he said.

In the meantime, Ann Hayes is nearing the end of her four years of remote learning and is set to graduate from her course later this year.

“I never thought it would be possible to do a degree like this, but it is,” she says. “A lot of on the course are in our 30s and 40s and have busy lives. Many are in good jobs in places like Electric Ireland, eir, Paddy Power and so on. We are all upskilling. We’re in jobs where we have serious experience, but in order to progress it’s important to do this.”