How a PLC led to an Emmy nomination

Shauna Keogh: ‘Telling other people’s stories can help you understand your own’ 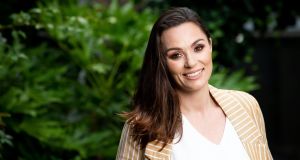 “The men of the Smoky Mountains were hunting for ginseng. Deep in the Appalachian range in the US, they do this work because it is lucrative. But, even though they had permits, it can be dangerous: we encountered rattlesnakes and bears, poachers and guns.

I had joined them in the Smoky Mountains to film a documentary series for National Geographic, and it gave me a taste for more adventure. Soon afterwards, I made a fishing show for Animal Planet, joining a crew who hunted for eels that only ran at night. The weather in Michigan was brutal and freezing: we taped heat warmers to our fingers to operate the cameras.

I always knew that I wanted to make TV and documentaries. This was not an option discussed in school or career guidance. It wasn’t seen as a stable career path and most people didn’t know a lot about it.

Still, when it came to applying for college courses, I only went for one: a post-Leaving Cert course in television production in Ballyfermot College of Further Education. It was easily my first choice; while my classmates were figuring out the most stable career path and what to put on the CAO form, I didn’t apply to a third-level through the CAO process at all.

Growing up, I loved watching documentaries. I distinctly remember the Cutting Edge series on Channel 4 and knowing this was the job I wanted. And when I went for an interview at Ballyfermot and got to look around the studio, I knew I was making the right call.

The course lasted for two years, and then I had a chance to do a masters degree. Instead, I went to England for work experience. At the time, The Newlyweds was on TV, Katie Price (aka Jordan) and Peter Andre were in the jungle on I’m A Celebrity Get Me Out Of here, and reality TV had started to become really popular. So I decided that I wanted to make an access-led series about Katie and Peter. I organised a meeting with their agents, pitched the show and got the gig. The next day, I used my savings to hire a camera, invest in equipment and started shooting.

I’d never shot a show for broadcast before, but I knew this was the road I wanted to take. I filmed for a number of years and, as the show grew in popularity, the crew got bigger. It ultimately lasted for nine series.

Celebrity TV shows were taking off but I wanted to move into factual programming. I met with an executive producer called Tina Flintoff, who went on to work as a commissioning editor for Channel 4, a powerhouse in TV and a female role model where they were not many at the time. She was such an important mentor for me. Later, I was offered a contract for reality TV but I wanted to make documentaries and was willing to start at the bottom. I worked with Tina on developing documentaries for BBC, Channel 4 and ITV. The subjects were varied: we tackled life as a transgender child, stories about the police force and even teenage vampires.

My reputation started to build through the documentaries I was making and one of my skillsets is dealing with sensitive subject areas. An opportunity came up to work with an American network and I was asked if I would be on for going out to the US to work on a show about morbidly obese children. I grabbed it and flew out to North Carolina to direct the series Too Fat for 15, which I was nominated for an Emmy.

People ask me if the Emmy nomination felt like I had landed. The answer is no. I get the best feeling from developing ideas, meeting people, telling stories and seeing the creative process come together. I’ve been really fortunate and privileged in the people I have worked with and the stories I’ve been able to tell: young teens suffering a crisis, 40-year-olds losing their virginity, mountain men and high-profile true crime murder cases.

I moved home to Ireland about three years ago and set up Empire Elite, where I started developing ideas and making shows for Virgin, TG4 and RTÉ. Empire Elite spent 18 months making Missing:Fiona Sinnott, which aired on Virgin in May. Fiona’s disappearance has always really resonated with me. She went missing around the time of my birthday and was never seen again. I wanted to understand her disappearance from the perspective of Fiona’s family. It’s always a challenge to ask a family to relive the saddest and most traumatic time of their lives but they were so generous. When one person goes missing, it ripples through a community and can tear a family apart. I still hope her disappearance can be solved and that the wall of silence will be broken and someone’s conscience will make them come forward.

I’m hugely invested in the films I make and while people might think I work too much, it is a huge part of my life and I love my job. My career was flying high and I had earned my stripes as a producer and director, but I feared that my sexuality could hinder me. I didn’t want people to find out that I was gay because I feared I would lose everything. Now I know that is not the case.

I came back to Ireland because my little niece was diagnosed with inoperable brain tumours and I wanted to be here with my family. I came home to a very different Ireland and I saw the changes through the yes vote in the marriage referendum, how we were becoming a multicultural society and more recently the repeal vote. I was 32 when I came out to my parents, and they were hugely supportive.

When RTÉ approached me to make The Only Gay in the Village about four years ago, I was not out long and I was still dealing with my own sexuality. I went to counselling to understand myself and to deal with the internal homophobia that was stopping me from being who I am.

Because I worked in the US and the UK, I was able to hide in the oceans between. While Dublin and Galway are great cities, it can still be hard to be gay, and it’s harder in rural Ireland. Telling that story was, for me, almost therapeutic and it helped me come to terms with myself.

Telling other people’s stories can help you to understand your own. For me, a PLC in Ballyfermot was the start of it all. The college years are the best of your life but you have to put in what you want out of it. I met a lot of great friends there including the cameraman James O’Reilly, who I have worked with on numerous projects. I wanted to be hands-on and learn everything I could, so I stayed in the studio to rig and to operate cameras. I knew I had found my place. I film, produce and edit and thought myself those skills sets, but it can be a difficult industry.

Funding remains a big issue: anyone can tell you that there isn’t a lot of money in documentary-making. I know that, but I do it because I love my projects. I am selective in what I choose, but one passion project, for me, has been working with the [GAA] footballer Cora Staunton. I was surprised that someone had not already made a documentary about such a talented and decorated sportswoman. Last year, I went with her to Australia where she had signed for the Sydney Giants as a semi-professional in the Aussie Rules and Empire Elite made a documentary for TG4 [which was critically acclaimed]. It’s nearly 2020 and I’m so happy that we’re seeing more recognition of women’s sports as mainstream rather than a niche.

Now that I am more than 15 years in the business, I give talks to support women in the industry and talk about my real-life experiences on location. I try to engage with younger people and help nurture talent as much as I can, particularly younger talent and fresh voices.

I’m not biased about gender but I would love to see more women in the industry. I’ve turned up on set and been asked: “but where is the camera man?” I have to tell them I am the camera woman. I want to be a positive role model for my nieces and nephew and show them everything from how we do green screen edits to the broader ideas of how we tell stories. There is so much you can learn from a PLC.”

In conversation with Peter McGuire