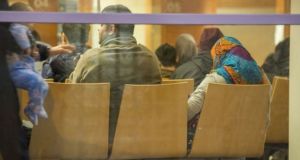 The current system has led to long queues outside the INIS office, particularly in September with students entering the next stage of their courses. Photograph: Dara Mac Dónaill / The Irish Times

Students from outside Europe who live in the greater Dublin area will be able to renew their immigration registration through a new online system from August 26th.

Minister for Justice and Equality, Charlie Flanagan announced plans on Monday to replace the current system which requires Dublin-based non-EEA students to present in person at the Burgh Quay Registration Office of the Irish Naturalisation and Immigration Service (INIS).

The current system has led to long queues outside the INIS office, particularly in September with students entering the next stage of their courses.

The introduction of the new system will coincide with the start of the academic year. It is expected the move to the online system will make a difference in the wait period of visas and free up in-person appointments at the INIS for other clients.

There will be no additional fee for applying online. However, students using the new system must have previously registered with INIS and be progressing to the second or later year of a degree course in order to use the new system.

Students made up 55,000 registrations of immigration permission to reside in the State last year. However, due to the new system being restricted to continuing third-level students living in Dublin, only 8,000 students are expected to use the new online system between September and November this year.

The Department of Justice said the INIS would consider extending the new online system to other categories of customers in the future, under its ongoing customer service improvement plan.