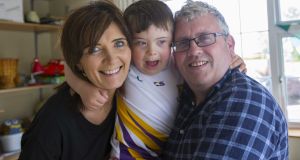 Cian Mulry loves to dance, is generous with his hugs and is sociable to the point that when he and his family go to a restaurant, they end up talking to everyone there.

The six year old is getting on well but his parents Tommy and Liz believe Cian, and possibly 1,000 other school-going children with Down syndrome, are being discriminated against because they are excluded from a summer tuition scheme known as July Provision.

The Department of Education funds extra summer schooling for all students with Autism Spectrum Disorders (ASD) and children with severe or profound intellectual disabilities. However, children with Down syndrome who have a mild or moderate learning disability are not included.

The Mulrys, who live in Roscommon town, fear that without this extra schooling their son will regress during the summer and lose much of the knowledge garnered during his first year in primary school.

“Cian has masses of potential and he deserves the same chances as everyone else,” Mrs Mulry said.

Three families of children with learning disabilities recently took the department to the High Court over the issue and reached an undisclosed settlement. Mrs Mulry described this development as “a sticking plaster” which does not address the real problem.

“Does this mean that we all have to go to the High Court to get what our child deserves? Of course most of us cannot do that.”

Cian’s parents, who are both nurses, have been paying €50 a week for two hours of tuition from a professional during the school holidays. They try to work with Cian themselves, although teaching him can be hard as he sees them as Mam and Dad and is not as inclined to cooperate as with a teacher.

“He needs 10 hours a week but we can’t afford that,” Mrs Mulry said. “We are lucky that we can afford two hours and I know others cannot afford that.”

Fidelma Brady, Down Syndrome Ireland’s national education officer, believes that summer tuition for children such as Cian is vital as people with the condition have a problem retaining information.

“As a teacher myself I often wondered when we went back in September what on Earth did we do last year because even typically developing children seem to forget everything,” she said. “But it can be November or December before children with Down syndrome are back to where they were.”

The Mulrys say this is just one of several battles they have had to fight to give Cian the best chance he can get in life.

“We got physiotherapy for Cian for about a year after he was born but then we had to go to Limerick to get it privately,” Mrs Mulry said.

She said the HSE typically does not provide speech therapy for children with Down syndrome until they are aged four, so “out of frustration” she set up a club when Cian was 15 months old to ensure he and others got that service.

When Cian started pre-school two years ago, they were told he was not eligible for the Access and Inclusion Model, a series of supports for children with disabilities, introduced by Minister for Children Katherine Zappone.

Mrs Mulry said that after eight months of pleading, she and Cian went on TV to highlight their case and “within 24 hours we got an email saying Cian was eligible and he shared an SNA with another child”.

Roscommon-Galway TD Eugene Murphy, who recently raised the July Provision issue in the Dáil, said the vast majority of children with Down syndrome do not qualify for the scheme, leaving them at a huge educational disadvantage.

“How can the Irish education system and the Government leave children with Down syndrome behind, and deny them the right to learn at their own pace?”, the Fianna Fáil deputy asked.

Minister for Education Joe McHugh met representatives from Down Syndrome Ireland in June for what a spokesman described as a “very fruitful discussion across a range of issues” including July Provision.

The department said the National Council for Special Education has carried out a review of the scheme and it was awaiting recommendations. However, he said no changes would be made until “next year at the earliest”.

Mrs Mulry added: “Cian has great potential. He has a great personality. If he gets the right support now he will be so much more independent when he becomes an adult. Everything is about early intervention.”