Money needed to ensure ‘stability’ of third-level institution with 2,800 students 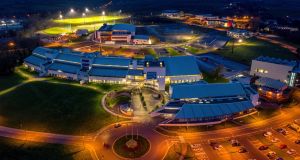 IT Tralee with the new Kerry Sports Academy in the background. The institute has received €5 million in emergency funding from the Government. Photograph: Domnick Walsh/Eye Focus Ltd

The Government has given €5 million in emergency funding to IT Tralee in order to keep the institution afloat.

The Irish Times understands that Kerry’s only third-level institution has been experiencing serious cash-flow problems and faced the possibility of drastic cutbacks or not being able to pay staff.

In a statement, the Department of Education has confirmed that funding has recently been approved to ensure the “stability” of the institution, but did not state whether it will be repayable to the State.

It said this question will be considered following a review of a new “sustainability plan” and a further assessment of IT Tralee’s financial position.

There have been mounting concerns over the solvency of Kerry’s only third-level institution due to major operational deficits and a large shortfall on its new Kerry Sports Academy.

IT Tralee has about 2,800 full-time students enrolled and employs about 350 whole-time equivalent staff.

An independent examination of the institution’s finances last year found it was overstaffed, losing money and experiencing significant cash-flow difficulties.

Staffing numbers, however, have remained the same and it now appears to be overstaffed relative to its overall student numbers.

It also found that the Kerry Sports Academy was facing a capital deficit of between €3 and €4 million.

In addition, there has been alarm within the Higher Education Authority (HEA) at the quality of information received from the institution as well as the capacity of the institute to resolve these problems.

In a statement, the department said the HEA has been closely monitoring the financial position of IT Tralee and has been actively engaging with and supporting the institute.

“This extensive engagement determined that emergency funding of €5 million was necessary in 2019 to ensure the stability of the institute and was subsequently approved by the HEA and the department,” a department spokesman said.

“This funding is subject to IT Tralee undertaking a stability and sustainability plan. The development of this plan is under way, and will be considered by its governing body and the HEA.

“All aspects of the operational and financial requirements of the institute will be considered following review of the sustainability plan and a further assessment of its financial position.”

While sources familiar with the institute’s financial situation say the funding will be repayable, others say it is highly unlikely the institution will be in a position to pay back this sum.

The institute is understood to have deficits of at least €10 million, though some worst-case projections indicate this could grow to €21 million.

Uncertainty over the financial future of the institute was cited as one of a number of grounds as to why a joint bid with Cork Institute of Technology to merge and become a technological university failed to get the green light earlier this year.

An international panel found the bid only partially met the requirements set out in legislation to secure technological university status.

A key concern was that the consortium needed more work on plans for managing academic, financial and administrative matters.

The two institutions are understood to have been at loggerheads over the share of senior management and academic roles in a merged institution.