It’s the greatest issue facing humanity. So why isn’t climate change on the curriculum? 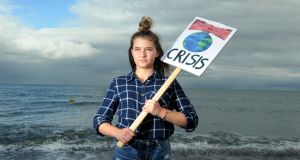 Climate activist Lucy Sky Dunne (14): “Everyone needs to know about this – it’s not something that can be learned by some, but not others. It’s something that’s going to affect literally everyone.” Photograph: Aidan Crawley for The Irish Times

Lucy Sky Dunne’s awakening as a climate activist came not on the streets of a school strike, nor on social media, but in a classroom.

The key for the 14-year-old student was just one hour a week spent exploring climate change in a course on sustainability which was piloted in her school.

This single hour propelled Dunne, along with fellow members of the Student Climate Activist Network, to call for the prioritisation of a lesser-known form of literacy within the education system: the ecological.

“Everyone needs to know about this – it’s not something that can be learned by some, but not others. It’s something that’s going to affect literally everyone,” said the third-year student.

Though formal education aims to prepare students for their future, a picture of a deeply uncertain tomorrow is being painted by the Intergovernmental Panel on Climate Change.

The value of ecological literacy is rising, as scientists warn of a radically altered world should societies fail to build sustainable futures.

As shown in last week’s global climate strike, students worldwide have been one of the most engaged groups in confronting the ecological crisis.

Climate change is a topic often dogged by misinformation, and students themselves are beginning to ask what is being taught about it in schools.

Student activist Dunne said climate change is “touched on” in subjects such as civic, social and political education (CSPE), geography and science, but focused education in the vein of the short course in her school is needed.

“Without that course, I and many of my schoolmates would not be as informed on the climate crisis, or feel like we have any power to do anything,” she says. “I think we’re one of only two schools in Ireland who do [it].”

The course was developed by teachers from Educate Together secondary schools in both north Wicklow and Cork, who felt ecological literacy should be more of a priority.

“From what I can tell, as a teacher, it isn’t the priority of the Department of Education,” says Kate Minnock, a developer at the north Wicklow school.

“At the moment, we have a push towards making our young people digitally literate. But, in essence, it’s unethical for teachers and those working in education not to have ecological literacy as the top priority in every school, because otherwise we’re not serving our young people.”

In the majority of second-level schools, education on climate change and sustainability is disjointed across numerous subjects, the majority of which are non-compulsory.

The National Council for Curriculum and Assessment (NCCA) consulted with more than 40 schools and their students over the past academic year in a review of senior-cycle education.

“Within this review, the themes of sustainability and climate change have frequently arisen,” says NCCA chief executive John Hammond of these meetings, reflecting growing concern around the issue.

He notes that Ireland has a National Strategy on Education for Sustainable Development in place, and the development of new specifications in certain second-level subjects have featured the themes of sustainability and climate change in recent years.

Yet some teachers have reported teething problems with such redevelopment of the junior-cycle curriculum.

Chairperson of the Irish Science Teachers’ Association and a second-level science teacher Aodhagan O’Suilleabhain says: “Teachers are given learning outcomes that they’ll share with the students,” but “there’s very little detail provided.”

“It’s very open to interpretation. It’d be very different in every school, in every classroom even, how much detail the students are actually exposed to,” he says. “You may get a teacher that is interested in climate change, that will push it and get the students excited about it, and then you might get teachers that are more into maybe physics.”

This lack of standardised coverage means a significant number of students are likely to emerge from secondary education with little in-depth knowledge of climate change gleaned from their studies.

In light of this, the Student Climate Activist Network has demanded that “the Government communicates the severity of the ecological crisis to the general public and reforms the primary and post-primary educations systems to address the need for ecological literacy”.

While the onus is currently on individual teachers and schools to prioritise this education, they are doing so in overwhelming numbers: 93 per cent of schools around Ireland are participating in the Green-Schools Programme, from primary and secondary level through to creches and special schools.

Green-Schools manager Jane Hackett says the programme has “grown to fill a space that hasn’t been filled” in the curriculum.

“A lot of teachers are really keen to learn more about climate change and learn more about how they can bring the science, and also the actions and the mitigations, into the classroom,” she says.

Organisations such as Eco-Unesco and Trócaire are also bridging the education gap, providing resources and workshops in schools. “We always have to turn away people,” says Trócaire’s development education manager Stephen Farley.

Movements like the Student Climate Activist Network now want to further push the boundary of what ecological education has constituted in the past.

“I’d like the Government to realise that we’re becoming aware of these issues, but we need to be educated properly on this,” says student activist Dunne.

“We need students to be aware that they can influence Government policy, like they’ve done already through the pressure they’ve put on the Government through the strikes this year – and for students to believe, and to be taken seriously, that their opinions and values are worthwhile,” says teacher Kate Minnock.

There are a range of different programmes and initiatives aimed at promoting environmental issues. These are some of them:

This programme sees student-directed committees raise awareness around environmental issues from waste to transport, and implement solutions within their schools.

Now in its 23rd year, the programme is operated by An Taisce with the support of Government departments and local authorities.

The organisation also runs a climate action week each October, in partnership with the Department of Communication, Climate Action and Environment. It provides teacher-training courses at both primary and secondary level.

This is an environmental education and youth organisation, working with more than 10,000 young people aged between 10 and 25 annually.

It operates in schools and youth-reach centres for early school-leavers, exploring environmental issues from biodiversity to climate based on the interests of its students.

It runs initiatives such as the Young Environmentalist Awards and an annual youth summit, and also delivers workshops and an after-school programme for 16-19-year-olds.

National director Elaine Nevin says: “Things are changing quite a bit in education, so that really now project-based learning and action work are seen as being very strong from a learning perspective.”

The overseas development agency has recently focused on a “three-year learning journey on climate justice” for young people in Ireland.

It creates resources that are freely available to schools and youth groups, and delivers supporting workshops.

It has also created an award-winning online educational game, based on Trócaire’s work in Honduras with people directly affected by the extreme weather events of climate change.

It aims to make connections between the local and the global using such case studies. Similar work is being done by organisations such as Concern and Goal.