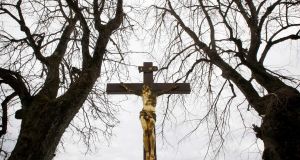 The mother of the boy said she was advised by the school that if she was not happy she had other “options”. Her son was the only non-Catholic child in his class. Photograph: Christian Hartmann/Reuters

A Catholic primary school has defended its policy of rewarding children who take part in extra-curricular religious ceremonies with “ homework passes”.

The parent of a child at Yellow Furze national school, in Co Meath, has made a formal complaint, claiming her son was one of two out of 33 in his class who was “penalised” with homework for not attending a religious ceremony.

“He came out of school crying. He told me the teacher had told the class that children who did not participate in the Communion choir would not receive a homework pass,” said the mother, who declined to be named on the basis that it would identify her son.

“On that day my son was the only child in the class who was not participating. He was also the only non-Catholic child in his class. We are atheist and this is not a choice that is open to him.”

The school did not respond to requests for comment from The Irish Times.

However, documents prepared by the school in response to a complaint by the mother show it has defended the policy and insists it did not discriminate against the boy.

The school said it provided all children who engaged in “positive behaviour” such as participating in the Communion choir, with a “reward” for doing so.

“Any student, regardless of his/her religion in our school who opted not to participate in this extracurricular event was not ‘rewarded’.”

The school rejected claims of discrimination for not issuing homework passes to non-Catholics on the basis that many other children – including Catholics – opted not to attend.

The mother of the boy said she was advised by the school that if she was not happy she had other “options”.

She said she has since moved her child to a multidenominational school a significant distance away from her home.