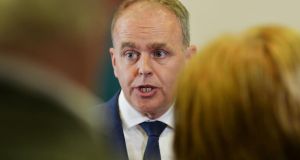 Minister for Education Joe McHugh has previously said that short school days should not be used for ‘behaviour management’. Photograph: Alan Betson

Schools are acting illegally by placing vulnerable children with learning disabilities or behavioural problems on reduced timetables, according to new research.

The study estimates that as many one in four children with disabilities – thousands of pupils – are being “suspended” through the use of short school days.

The report, Education, Behaviour and Exclusion: The Experience and Impact of Short School Days on Children with Disabilities and Their Families in the Republic of Ireland, is due to be published today.

It includes a poll of almost 400 parents of children with disabilities, conducted by academics for Inclusion Ireland.

The research found the average short school day lasted only two to three hours, with many children forced to attend school for less than an hour a day.

It found the proportion of pupils with disabilities on reduced timetables rises to one in three for children with autism.

“Children are being denied their right to education because of the lack of acceptance and accommodation of their differences,” according to the report’s lead author, Deborah Brennan of Technological University Dublin. “Many parents told us they are being forced either to accept a short school day or to remove their child from school.”

The report says it is clear from research that shortening of school days and suspensions are in many instances illegal, and are often damaging to children, socially, emotionally and educationally.

Children’s rights to a full education is provided for under the Constitution and is backed up under the Education for Persons with Special Educational Needs Act, 2004.

The report’s co-author, Dr Harry Browne of TUD’s school of media, said they found short school days were “doing lasting damage to children and their families – educationally, emotionally and financially”.

The findings have prompted Inclusion Ireland, the national association for people with an intellectual disabilities, to call on Minister for Education Joe McHugh to compel schools to meet their obligation to educate children with disabilities.

Mr McHugh has previously said that all children have a right to a full school day and that short school days should not be used for “behaviour management”.

The research, however, finds that children’s behaviour is the most common reason schools give for imposing short school days.

“Schools appear to be using a short school day as a behaviour management ‘shortcut’, sometimes when dealing with quite serious behaviour problems, without consulting experts outside the school or addressing root causes,” Ms Brennan said.

“Some of these ‘challenging behaviours’ are ways that children normally act when they have a certain condition – so this is simply discrimination,” she said. “And some behaviours are a response to how a child is treated in school.”

Dr Browne added: “The fact is, schools are taking advantage of their relative autonomy in the Irish system to avoid their obligation to educate children with disabilities.”

Enda Egan, chief executive of Inclusion Ireland, said the UN Convention on the Rights of Persons with Disabilities, which Ireland ratified only last year, provides that people with disabilities shall have the same right to avail of, and benefit from, appropriate education as their peers.

He said the organisation wants Mr McHugh to compel and monitor schools so that they stop blocking the admission of children with disabilities, including by their admissions policies.

“It is very worrying to us, the impact that short school days are having on both parents and children,” Mr Egan said, “It is causing severe anxiety in the children, so much so that many have indicated not wanting to go to school at all.”

He said families were suffering significant financial loss as they “scramble to keep afloat and hold onto their jobs with being available to mind a child for extra hours each day or to collect their child from school at a moment’s notice.”

The research was funded by the Irish Research Council under a scheme that partners researchers with the community and voluntary sector.