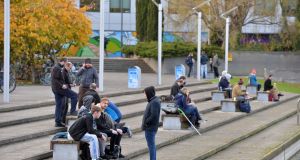 Employment rates for graduates have returned to levels last seen during the economic boom, according to a new report.

Of the remaining graduates, many went on to further studies (31 per cent), while smaller numbers were seeking employment (5 per cent) or unavailable for work (3 per cent).

The Higher Education Authority report is based on data collected nine months after graduation.

Overall, it finds the general upward trend in improved employment prospects for graduates has held up and the proportion of graduates now finding work in Ireland is back at pre-recession levels.

It finds that graduates in the education sector – such as teachers – had the highest levels of employment (85 per cent), though many find it difficult to secure permanent positions.

ICT or technology graduates had the highest average salaries with 38 per cent of graduates earning €33,000 or more.

By contrast, arts and humanities graduates were the least well-paid and had lower rates of employment. A total of 15 per cent of graduates were earning less than €13,000.

Overall, as expected, salaries for graduates rose in line with their education levels. For example, a total of 40 per cent of honours bachelor degree graduates earned under €25,000.

At doctorate level, about 35 per cent earned more than €45,000, compared to 18 per cent with higher diplomas and 3 per cent for honours bachelor degree graduates.

Employment rates, too, are much higher for those with college degrees.

Within Ireland, the report shows significant regional variations in where graduates are employed.

Dublin and Cork are where most Irish university graduates found employment.

The study does not include graduates from the Institutes of Technology which are significant players in regional development.

Nevertheless, there is concern more university graduates are not being employed in the regions.

Dr Graham Love, chief executive of the HEA, said: “The evidence continues to point to a higher education qualification meaning that you are less likely to be unemployed and tend to have a higher starting salary.

“There is a challenge, however, for us to create more graduate employment opportunities outside of Dublin and Cork in order to ensure better regional development.”

He said the planned development of technological universities was one way of addressing this.