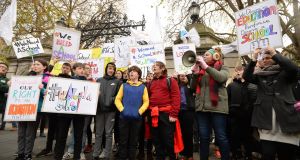 Educate Together secondary schools are more diverse on average than the typical Irish post-primary school, according to new research by the ESRI.

The study is based on surveys of students and interviews with school staff at 11 out of Educate Together’s 19 second-level schools.

The schools, which describe themselves as equality-based, are multi-denominational and relatively new to the second-level school sector.

The ESRI study found that the degree of linguistic and ethnic diversity was broadly similar to the wider school community.

However, the range of beliefs was more diverse with almost 40 per cent of students stating that they did not have a religion.

Survey responses and focus groups also indicate there is a higher proportion of students with additional needs at Educate Together secondary schools.

The research found that alongside this diversity, students expressed strong feelings of inclusivity and belonging within their schools, and very high self-reported rates of respecting people from other cultures.

The research also found a strong culture of respect at the core of relationships between students and teachers, supported by the use of restorative practices to behaviour and discipline.

The study concluded that teaching practices were in strong alignment with progressive approaches at the core of the new Junior Cycle.

Within the boundaries of the national curriculum, it said teachers provided student-centred and differentiated education while making extensive use of active learning methodologies and technology.

However, it raised concern that many new or “starter” schools included in the study were in temporary and, at times, unsuitable accommodation.

Despite these challenges, it said students described school environments where their well-being was strongly supported.

The schools have also proved able to attract teachers and school leaders committed to the Educate Together ethos, and to creating school communities in which very diverse students say they belong.

The findings of the report suggest that the inclusive ethos of the second-level schools creates a welcoming environment for all students, regardless of background or need.

The study’s authors said Department of Education policy measures should better monitor and address the disproportionate level of student need at some schools and ensure new schools receive the resources they need to ensure students with additional needs are fully supported.

It added that starter schools can face significant delays in securing appropriate accommodation for their students and that interim arrangements were not satisfactory at some schools and, at times, worsened the student experience.

ESRI author Georgiana Mihut said a strong culture of respecting diversity was evident at the second-level schools visited as part of this study.

“As the sector continues to grow, it is well-positioned to serve as an example of how schools can increase their democratic practices and better support the increasingly diverse population of Ireland, ” she said.

However, she said the demands placed on school leaders, particularly in newly established schools, were considerable.

The evidence gathered pointed to the importance of administrative, mentoring and other supports, as well as the efficient and timely progression of school building planning.

Educate Together chief executive Dr Emer Nowlan said it was heartening to see the quality of student-teacher relationships in particular and students’ strong sense of ballooning.

These, she said, were crucial to ensuring every student reaches their full academic and social potential.

She added that the research also provided stark evidence of the challenges faced by new schools in temporary accommodation and highlighted the need for significant improvements in planning for developing schools of all types.