Do we really want children taught by teachers dressed in visors and face masks? 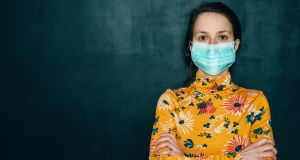 Pandemic. A word I was aware of but never thought would so become part of our daily discourse. Social distancing. A cold term, which as it has turned out, is exactly what it means. Its effects are many and varied.

As a primary school principal of 13 years, the last nine weeks have been the most bizarre experience.

The three hours notice to close. The announcement to staff was quick and, luckily, we had a plan in place from earlier that week in the event of closure. Nevertheless, it felt surreal when word came through on the Thursday at 12pm that we were to close that evening.

Workpacks were put together and books were packed up. Texts and emails were sent to parents and the website was updated. And that was that.

Parents at the gate thanking us for all and hoping we would be back soon. Children leaving in droves, giddy with excitement that school was out but also a nervous anxiety, I’m sure, at the rug being pulled from under them. I am certain this was the scene all over the country.

Ten weeks on and, well, the situation is largely the same. Google Classroom, Seesaw, Zoom lessons and distance learning are the new buzzwords in Irish education.

Schools all over Ireland are managing, in collaboration with parents, to deliver some form of education for our young. Not everyone or every thing is being catered for, however.

School is about much more than academia. Children are missing out on the various social skills they learn by just attending school. Playing, fighting, making up, debating, joking, laughing, getting in trouble and facing the consequences, collaborating, questioning, arguing ... learning.

More worryingly, for those children (and there are many) with vulnerablities whether that be, for example, an unstable home life or living with special needs, this has been a monumental disaster.

The familiar face of the dedicated teacher, the caring and thoughtful SNA and the focus of a daily routine in purpose-built and well-resourced classrooms has been struck out.

Zoom lessons are no substitute for real people and real surroundings. And, let’s not forget about our sixth class pupils deprived their rite of passage and the chance to receive Confirmation, that final school tour, the football competitions and the signing of the t-shirts.

As school managers we are in limbo. Some certainty was put to us when the Government announced closure until September. That’s all well and good, but what then?

Appointments of new staff members are going to be on hold. How do we hold interviews? Planning for major capital projects has been delayed. At this moment we don’t know whether we should be sourcing PPE or not.

Depressing videos from China of children being sprayed, scanned and fitted with masks as they enter school and images from Europe of children sitting in marked out boxes on their own in yard are being touted as examples of where a return to school is workable

The ethos of any properly functioning national school is built on empathy, trust, familiarity and togetherness. A teacher at the top of the class dressed in a gown, visor and face mask will display none of these traits. A child being sprayed, scanned, checked and cordoned off for the day, two metres from everyone else, is so far removed from the ethos of primary education that it’s unrecognisable.

This type of regime would be especially traumatising for children with special needs. We simply cannot allow this to be the new norm. Social distancing is unworkable in primary schools. I have children of my own and it depresses me that this could be awaiting them when they return to school in the autumn.

The last couple of weeks has seen an increase in calls to open primary schools before the summer holidays. This comes hot on the heels of a concerted effort by some commentators to have the Leaving Cert cancelled – square that circle if you can.

I would be delighted if we could open schools before the summer but I am against it as things stand. The long-term social development and wellbeing of children and staff in primary schools would be shattered by a social distancing regime.

School should be a place of fun and innocence, a place of safety and diversity, a place of togetherness and community. Social distancing would instantly rob a school of all those traits common to every school the world over.

A return to school in autumn seems to be the most reasonable outcome at the time and is part of the roadmap set out by the Government. Stakeholders must immediately begin planning for this return. The hope must be that further information emerges that children aren’t prolific vectors or super spreaders and mortality and infection rates continue to fall.

If that is the case, one could reasonably argue for a relaxing of social distancing in schools. By all means hand sanitising should be the norm, coughing etiquette added to the code of behaviour and special arrangements made for parents or staff members with underlying health issues. In order to get our education system back up and running, we need to be able to let children be children and teachers be teachers. Otherwise, another Covid-19 phrase comes to mind: “Is the cure worse than the disease?”