The Leaving Certificate Exam has been postponed and pupils will be offered the option of receiving calculated grades, Minister for Education Joe McHugh has announced. Video: RTE News Now 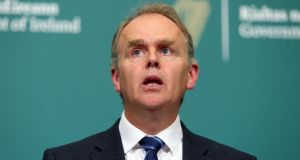 Minister for Education Joe McHugh announced on Friday that the Leaving Certificate exams will not go ahead this summer for the first time in almost 100 years. Photograph: Leon Farrell/PA Wire

The Government is concerned over its exposure to legal action by students who may miss out on college places following its decision to replace the Leaving Cert with a system of “calculated grades”.

Minister for Education Joe McHugh announced on Friday that the exams will not go ahead this summer for the first time in almost 100 years.

Instead, students will have the option of receiving grades calculated by teachers based on their school work or going on to sit written exams in late 2020 or early 2021, subject to public health advice.

However, Mr McHugh has admitted there are “legal vulnerabilities” with the new plan, while the Attorney General is understood to have briefed Ministers on areas of concern.

These are understood to relate to students’ legitimate expectations to be able to sit an exam, as well as their right to take up a college place after sitting the Leaving Cert.

Under the plan, students who undertake the written exams will not be able to take up their college places in the coming academic year and will have to wait until next year.

However, Ministers believe the fact there is strong public health advice to show it is not safe to proceed with the exams may offer protection against any litigation.

The Cabinet also heard concerns from a large number of Ministers over the impact on students who are forced to wait until later in the year to sit the exam.

There were also fears about impartiality and the impact on those from disadvantaged backgrounds.

One Cabinet source said there was a “substantial body of opposition” and “a lot of reservations expressed” and “some very strong resistance”.

“The discussion was robust. It was a different atmosphere to the usual meetings,” a senior source said.

Meanwhile, the executive committees of the two secondary teachers’ unions met on Friday night to discuss the plans.

The Teachers’ Union of Ireland (TUI) executive committee is understood to be prepared to accept the plan, while the Association of Secondary Teachers’ Ireland (ASTI) was still debating the matter late on Friday. Sources said that while there were deep reservations , there was also a recognition that there was no viable alternative.

School principals, meanwhile, said they were prepared to support the move given that there was no “perfect solution”, while students’ representatives said the move finally gave exam candidates much-needed clarity.