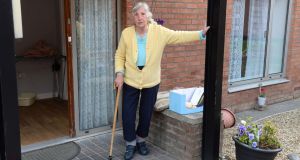 Demand for free food more than doubled last month compared to the same period last year and continues to grow because of the coronavirus-related downturn, the largest food charity in the State has said.

FoodCloud continues to distribute food to more than 400 bodies despite the temporary closure parts of the charity sector. The organisation is supplying food to 32 new charitable efforts since March and has a waiting list of 55.

Chief executive Iseult Ward expects the demand to continue well after lockdown due to the expected recession. “The challenge for us is going to be sustaining the provision.”

In addition to redistributing surplus food from retailers and wholesalers, FoodCloud delivers the EU’s Fund for European Aid to the Most Deprived (Fead) programme on behalf of the Department of Social Protection.

A total of €26.7 million is allocated through Fead to Ireland, 75 per cent of which is for food. Its target groups include the homeless, children in poverty, domestic violence victims, people in addiction, Roma and Traveller communities, and households in poverty.

“We distributed over 152 tonnes of surplus and donated food in April, more than double the same period last year,” said Ms Ward. “At the start of the year we anticipated a 20 per cent year-on-year increase for April. We also distributed 112 tonnes of Fead products.

“We still cannot meet the demand for food. We need more large-volume food donations from the food industry, particularly of fruit and veg.”

Among the new services is a foodbank being run from the grounds of a football club in Inchicore, Dublin.

St Patrick’s Athletic FC was approached by a local addiction service, Frontline Make Change, in March. The club’s community officer, David Morrissey, said the welfare of fans and the community had always been a priority in its work with the Kilmainham Inchicore Network (Kin).

“When we were approached by Frontline, it became clear the provision of food parcels locally was a necessity. We were delighted to be able to help to make this a reality. It was a no-brainer,” said Mr Morrissey.

Dublin South City partnership is also involved in distributing about 190 food parcels a week, with “demand growing every week”.

Food is sourced from FoodCloud and non-perishable food donations are being accepted at St Patrick’s grounds, Richmond Park, on Saturdays, Mondays and Tuesdays.

Parcels containing tea, coffee, sugar, cereals, tinned fruits and vegetables, canned sauces and jams, as well as biscuits and cooking oils, are packed in Richmond Park, to be distributed by Garda-vetted volunteers on Thursdays.

Frontline psychotherapist Andrew O’Shaughnessy has been distributing the packs and has been “really shocked” at some of the housing conditions, particularly in the private rented sector.

“These places are not fit for purpose, and the State is using this private accommodation for social housing tenants. I used to work in homeless services so for me to walk up to some of these doors and be that appalled, well, you could get emotional about it.”

Aoife Hannan, project manager with Kin, has been struck by the additional food costs faced by vulnerable, isolated households during the pandemic.

“Families who have children with special needs, single parents who can’t get out to do shopping, who are stuck at home and can only go to the local shop, can’t get to the big supermarkets, their costs are higher because they don’t have the freedom, or the supports.”

Case study: ‘The food parcel started last week. It was very good now it was’

is among the Inchicore residents receiving food parcels over the past month.

She has lived in Bulfin Court, a Dublin City Council older person’s complex, for 14 years.

“I just have my pension. My daughter, she collects it and pays me phone and pays me rent. It wouldn’t leave much but thank God I don’t need much. It’s lovely here.”

In her food parcel, “we got tea and sugar and cereal, a few bits. It was very good now, it was. Ah God yes. I’d be very grateful. In my time you didn’t get much. We had to make things stretch”.

She does not mind cocooning, though misses seeing neighbours in the complex’s kitchen and day centre. A hot meal is delivered to residents instead, during the pandemic. Though there is a “little shop” nearby she couldn’t go during the cocooning and still prefers not to venture out often.

“The food parcels will help. I used to go up to Dunnes when someone brought me in the car. It’s cheaper than the shop, but I can’t go up there now either.”

A mother of 13 and grandparent to more than 60 grandchildren and great grandchildren, she grew up in Gardiner Street in the north inner city. She lived her married life in the south inner city, in Bride Street, before “we were shuttled out to Dolphin House” – a large local authority flat complex in nearby Dolphin’s Barn. “We had two bedrooms, with 13 kids. But we managed,” she says.

She is widowed since 2006. Her children visit, though have not been able to come into her home in recent weeks.

“They’re very good. Thank God I have good health. I always took cod liver oil. I get them in a health shop. They’re dear but I take them.”