Campaigner conferred with BA in criminology 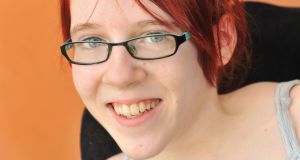 Disability rights campaigner Joanne O’Riordan, who graduated from UCC this week, has paid tribute to those who supported her during her time in college.

The 22-year-old who has no arms or legs is one of seven people currently living  with the condition Tetra-amelia syndrome.

She was conferred on Tuesday afternoon with a BA in criminology by UCC president Prof Patrick O’Shea.

“To say I’m ecstatic would be an understatement. It’s hard to imagine that a person with a disability is less likely to attend college let alone graduate,” she said.

“I have loved my time studying criminology here is UCC. The course was challenging but enjoyable.

“I got huge support from the Quercus scholarship and UCC’s disability support service. I found UCC very open-minded and accessible, I rarely had a problem but if I had, they were very quick to help me solve it.”

Ms O’Riordan gained worldwide attention in 2012 when she addressed the United Nations in New York about the importance technology has played in her life.

She was grand marshal of the St Patrick’s Day parade in Dublin in March 2016. UCC awarded Ms O’Riordan its top accolade in 2014, a Quercus active citizenship scholarship.

Having graduated, Ms O’Riordan – who is a regular contributor to The Irish Times – said she hoped to go on to pursue her passion: sports journalism.

She said her criminology degree was a magnificent “window on the world” which gave her insights into our inclinations to “err, conflict, blame and punish”.

Prof John O’Halloran, UCC deputy president and registrar and director of the Quercus programme, said the university was committed to creating an environment in which academic excellence can be combined with opportunities for personal development, independent thinking and the nurturing of talent across many domains.

“Joanne has excelled in so many ways. We are proud of her as she graduates today and look forward to seeing her career in journalism unfold,” he said.