Alternative accommodation to be sought for 1,200 pupils 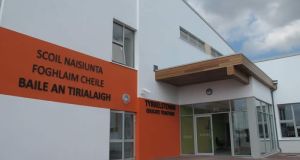 Tyrellstown Educate Together National School which is to close following structual assessment inspections.

Two Dublin primary schools are to close immediately following structural assessment inspections carried out for the Department of Education.

The schools are among 30 or more schools built by Western Building Systems since 2008 which face structural assessments over the coming days following safety concerns.

The department is to source alternative temporary accommodation for students affected following the mid-term break.

Remedial works are likely to get underway shortly, though education sources say they do not know how long it will take to complete.

The schools were delivered under a fast-tracked “design and build” government programme, which began in late 2007.

Nearly 100 transition year students have been told to stay at home this week as a result.

Problems were identified during a fire safety audit when the walls in two classrooms were opened up.

A structural engineer found ties fixing the exterior and interior walls were absent or inadequate in places.

In a statement, the Department of Education said it took the decision to close both schools with immediate effect following advice from a consultant structural engineer.

“The investigations at Tyrrelstown today, while not identifying any imminent danger, suggest that those two schools should close as a precautionary measure to allow for further detailed investigations at both schools,” it said.

Minister for Education Joe McHugh acknowledged the disruption that the school closures will have on families and parents, students and staff of the affected schools. He said his department’s key priority was the safety of pupils and staff.

Officials are working closely with school authorities in relation to interim accommodation solutions for the over 1,200 affected pupils.

“The target is to have interim accommodation solutions in place for when pupils return to school after the mid-term break next week,” a spokesman said.

Educate Together said that it has been told by officials that its school building in Tyrrelstown cannot be occupied while remedial works are being carried out.

A spokesman said it was anxious that structural assessments take place at all other affected schools as a matter of urgency to ascertain the facts .

This led to audits in four other schools built in 2008 which were constructed under the department’s “design and build” programme.

Western Building Systems went on to secure more than 30 contacts, including some in recent years.

It is currently involved in building Greystones Community National School in Co Wicklow and Shoeblacks Educate Together in Sandymount in Dublin.

The company has previously defended its work on the school projects, and claimed it was not responsible for fire safety issues.

It said work carried out by “other contractors subsequent to our handover” may have led to defects or breaches of regulation.

A spokesman for Western Building Systems said the company was a “ responsible, solutions focussed professionals operating for 35 years”.

“We place considerable emphasis on delivering high quality work on each of our projects, always ensuring compliance with regulatory requirements. These include projects which have met the Department of Education and Skills compliance standards.

The spokesman said the company “fully recognise that this is a very important matter, not least for the pupils, parents and teachers of the schools involved”.

“Each of our Department of Education and Skills’ projects, both before and since the amendments to building regulations in 2014, were subjected to inspections during construction. Every time, each was certified as meeting compliance standards.”

He said the company was “interested in getting to the bottom of this and that starts with establishing the facts”.

“We are moving to intensify our engagement with the Department and other relevant bodies to better understand the issues which have now arisen and to work to resolve them.”

He also said the company had received “some rather than all” of the individual school fire audit reports.

“Of those we have received, we have responded with two exceptions which have only recently been issued to us.

“We are writing to the Minister for Education and Skills on the matter and remain available to meet with him and his officials.”