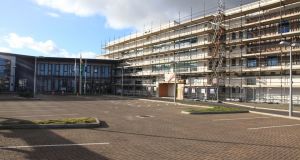 The construction firm at the centre of a controversy over fire safety and structural concerns in schools built in the last decade has been paid over €80 million by the Department of Education since 2013.

Over €60 million was paid out by the department since late 2015, when fire safety issues were first raised with schools built by Western Building Systems (WBS).

The firm, which built 40 schools for the department over the last decade, was regularly among the department’s top-three highest-paid construction contractors, according to financial information published by the department.

While it has been at the centre of allegations of lapses in fire safety and structural concerns, it is currently involved in building Greystones Community National School in Co Wicklow and Shellybanks Educate Together in Sandymount in Dublin.

Following the audits, the department announced further fire safety reviews would be carried out at 25 other schools delivered by the construction firm. Since then, a further €13 million has been paid by the department to WBS.

All these schools, and a further 10 built more recently, now face structural assessment inspection by officials working on behalf of the Department of Education over the coming days.

The department has recently begun legal actions against WBS in relation to four schools where remedial fire safety work has been required.

The Office of Public Works is involved in legal action with WBS over the construction of a building for Whitehall College of Further Education.

Taoiseach Leo Varadkar confirmed in the Dáil on Tuesday that litigation was under way against the company in respect of four schools.

In a statement on Tuesday, WBS said it had been operating for 35 years and “places considerable emphasis on delivering high-quality work”.

The statement said “until now, our integrity has never been questioned” and that all of its school building projects had been inspected during construction.

“Every time, each was certified as meeting compliance standards.”

The company said it recognised fully that structural and fire safety issues in schools was a very important matter, particularly for pupils, parents and teachers in all affected schools.

“We are interested in getting to the bottom of this and that starts with establishing the facts. We are moving to intensify our engagement with the department and other relevant bodies to better understand the issues which have now arisen and to work to resolve them.”

The firm said it had not received all of the completed individual school fire safety audit reports, but had responded to all but two of the reports it had received.

The Tyrone-based firm reported a turnover of £37 million (€42 million) last year, according to filed financial accounts.

WBS was also awarded a contract by Dublin City Council worth €4 million, to build 22 “rapid build” modular homes in Poppintree, Ballymun, which were completed in 2016. The firm began as a flat roofing company in 1982, set up by Martin McCloskey.