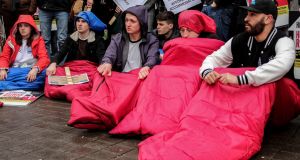 DCU students brought sleeping bags to protest. They said: “If we can’t afford to stay in Shanowen, we will sleep out here instead.” Photograph: Mark Carroll

DCU students held a protest over rent increases of over 20 per cent in privately-owned student accommodation in the Glasnevin area on Thursday.

The purpose-built Shanowen Square accommodation complex recently announced a rental increase of 27 per cent for the 2018/2019 academic year while the operators of the nearby Shanowen Halls announced an increase of over 23.5 percent.

The increase brings the total cost to €8695 in Shanowen Square, €1850 more than what students are currently paying. The rent covers from the 10th of September to the 25th May, a period of eight months – meaning rent is the equivalent of €235 a week.

Shanowen Halls’ rate is €8,325 for the academic year, which is the equivalent of €225 per week. Both accommodation complexes also require a €400 non-refundable deposit.

DCU Students’ Union issued a letter of protest in response to the increases earlier this week describing them as “completely unwarranted” and said they would result in “undue stress and pressure” on students.

Thursday’s protest started on the DCU Glasnevin campus. Some 80 students marched through university buildings and finished the protest outside the Shanowen Square and Shanowen Halls complexes.

Students’ Union president, Niall Behan, said the increases are going to prevent students from furthering their education. “These increases are an attack on every student in DCU. It is an insult, and one we will not take lying down,” he said. “These increases will mean students won’t be able to go to college or will have to drop out and that’s just not acceptable.”

“These increases are an attack on every student in DCU. It is an insult, and one we will not take lying down,” he said. “These increases will mean students won’t be able to go to college or will have to drop out and that’s just not acceptable.”

People Before Profit Cllr Andrew Keegan said he supported the student’s call for a reversal of the proposed rent increases and a commitment from DCU to condemn Shanowen if the increases are not reversed.

“€7,000 up to €9,000 for student accommodation is obscene,” he said. “The increase is not even benchmarked with the rate of inflation. Inflation is 2 per cent and this is 27 per cent.

“If students can’t afford accommodation, they will have to commute. If they have to commute for 3,4 or 5 hours a day then that’s taking time out of studying. It will have an effect on their education.”

The operators of Shanowen did not respond to a request for comment at the time of publication.

Craig McHugh, a second year Economics, Politics and Law student in DCU, said he believes the Government needs to enact legislation to protect students from these “year on year increases”.

“The Government has a four per cent cap on rental increases for long-term leases but for some reason, because we’re students we are somehow exempt from this system,” he said. “We cannot stand by and allow this to happen. This isn’t just for us. This is for our brothers and our sisters and every student that comes after us.”

Trinity students were also present at the demonstration in an act of solidarity with DCU students.

Conor Reddy, a Trinity student, said: “I know it seems scary but these types of radical actions are what will cause change. If you stick together and have a great SU then you can do it and you can win. We’re [TRINITY]behind you.”

An online petition was started last week and has gathered over 12,000 signatures to-date.

A statement issued by DCU said “There is significant public comment and justifiable student concern regarding recent rises in accommodation costs in student accommodation in the general vicinity of DCU.”

“These properties are not owned or managed by DCU. Any queries in relation to the management of these properties should be directed to the private owners.”

The university added that it was “acutely aware” of the financial pressures faced by students and their families. “Consequently, we work very hard every year to ensure that the accommodation we provide across our three campuses is as inexpensive as we can possibly make it,” it added.