Student teachers may drop out due to financial difficulties - poll 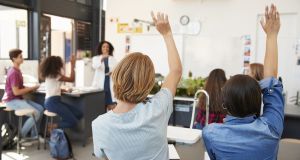 Trainee teachers who are required to carry out unpaid work in schools as part of their studies are suffering from severe financial difficulties , a new survey indicates.

The poll of more than 3,000 student teachers indicates that close to half - 42 per cent - consider dropping out due to financial pressures.

The report, by the Union of Students Ireland (USI), calls for teachers in initial teacher education to be financially supported by Government in similar ways to other professionals.

The survey found a large majority (71 per cent) of these students hold part-time jobs during placements in order to pay for rent, teaching materias, travel and food.

Among the biggest individual costs cited included a €1,500 Gaeltacht fee, which is mandatory for most students seeking to become primary teachers. These fees were introduced in 2011 by the Department of Education.

However, he said students were battling the high cost of living with no financial support.

“Along with working part-time jobs, students are on placements lasting 30 - 35 hours a week with no support for travel, food or materials,” he said.

“The reality is students can’t cope with the cost of living, without another job on top of this ... the €1,500 Gaeltacht fee is an extra cost put onto student teachers alongside the €3,000 registration charge.”

He said studies indicated the average cost of college was €12,500, while students in Ireland are paying the second highest fees in the EU.

Patricia King, general secretary of ICTU, said the costs borne by student teachers were another example of the obstacles young people face before fully entering the labour market.

“Clearly, gaining quality experience in the workplace is something that must be supported, but not at the risk to student learning and health, as indicated by the report,” she said.

Teachers’ Union of Ireland president Joanne Irwin said the proportion of students considering dropping out before completion of their studies was an “alarming statistic”.

“Particularly at a time when there is already a crisis in Irish education in terms of teacher recruitment and retention,” she said.

Ger Curtin, Association of Secondary Teachers, Ireland (ASTI) president, said the cost of entering second-level teaching was prohibitive for many graduates, especially for those from less affluent backgrounds.

“We fully support the USI in their campaign for a payment for student teachers who are undertaking teaching as part of their studies,” he said.