DCU rules out men in adverts for three academic posts 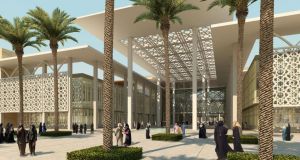 Princess Nourah bint Abdulrahman University: “It is a requirement that only female academic staff teach the female student populace,” says the Department of Education

Dublin City University has said it will consider only women candidates for three academic posts it has advertised in Saudi Arabia.

The university plans to hire a lecturer in data analytics, an adjunct lecturer in advanced practice nursing, and an assistant professor in marketing. All will teach at Princess Nourah bint Abdulrahman University, or PNU, the world’s largest women-only college, in Riyadh, under the two institutions’ partnership agreement. “In line with a genuine occupational requirement, only female applicants can be considered for this role,” the job advertisements say.

The Department of Education said the university “was established by the kingdom of Saudi Arabia and, as such, adheres to the kingdom’s laws, culture and customs. It is a requirement within PNU that only female academic staff teach the female student populace . . . which DCU must meet in order to deliver the programmes.”

The academics’ salaries will be paid through DCU Commercial Ltd, a subsidiary of the Dublin university that declares itself an equal-opportunities employer, or one that agrees not to discriminate against job applicants on the basis of race, religion, nationality, sex or age.

The nursing-lecturer advertisement says applicants need to be “sensitive to the evolving education, research and clinical agenda in nursing and healthcare in Saudi Arabia”.

DCU began its partnership with Princess Nourah bint Abdulrahman University in 2012, when it sent academics from its business school to teach students in Riyadh for an initial four-year period.

The university could not be contacted for comment on the women-only advertisements.