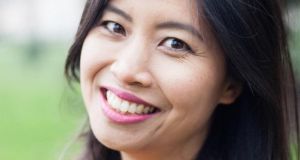 Winnie Li: “Rebuilding my relationship with Ireland, in the wake of my own rape there, has been one of the most unexpected and reaffirming steps in my journey of recovery.”

The US-Ireland Alliance was set up by former political aide Trina Vargo in 1998 amid concerns about the relationship between the countries, with the Mitchell Scholarship aiming to connect future US leaders to Ireland.

More than 200 students have studied at postgraduate level in Ireland under the programme named after former US senator George Mitchell, who chaired the talks leading to the 1998 Belfast Agreement.

Some 323 applications were received for 12 scholarship places in the coming year’s class.

Novelist Winnie Li, who is originally from New Jersey but now lives in London, was in the first class of George Mitchell scholars in 2000-2001, studying for a masters in English at UCC.

The scholarship was “hugely valuable” for fostering real relationships, she says, “where people from both countries can realise there is much more to these cultures than the obvious stereotypes and myths”.

Her relationship with Ireland took a traumatic turn in 2008. On a return visit, to attend 10th anniversary events to commemorate the Belfast Agreement, she was raped by a teenager in a park outside Belfast.

“I went from being a Mitchell scholar who was supposed to have a close relationship with Ireland to a victim of a horrific crime which had happened when I was visiting Belfast,” said Li (39).

She returned to the city for research for her novel Dark Chapter, which was published last year, and said it was a “gradual process of being okay with the idea of being in Ireland again.”

“Rebuilding my relationship with Ireland, in the wake of my own rape there, has been one of the most unexpected and reaffirming steps in my journey of recovery from that trauma,” she said.

Alec Schierenbeck (31), a native of Brooklyn, New York, was in the Mitchell scholars class of 2010, studying international relations at UCD.

He believes the scholarship opened doors for him, helping him land a place in Stanford Law School in California. This summer he will starts a prestigious clerkship for Justice Stephen Breyer, a liberal judge on the US Supreme Court.

He sees the Mitchell scholarship as a long-term investment aimed at strengthening the modern relationship between the US and Ireland.

“Over time, Ireland is seeding the ranks of US business, media, entertainment, academia, government and culture with young people who understand Ireland and want to deepen the bonds between the two countries. And over the long term that investment will pay significant dividends,” he said.

Cameron MacPherson (24), who is from upstate New York, has been accepted on the Mitchell scholarship class of 2018-2019. He will study theology and inter-religious studies at Trinity College Dublin.

He picked Mitchell over the Rhodes scholarship at Oxford for reasons including Brexit because Ireland will be “an increasingly important partner for the US as the only primarily anglophone EU member state”.

“The one thing that nearly all former scholars note is that the experience continues long after leaving Ireland,” he said.

“Mitchell scholars stay connected to the community and to the nation that is kind enough to enthusiastically welcome us.”