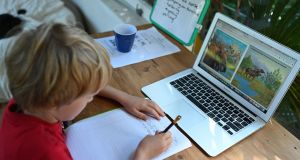 Changes to primary schooling as a result of coronavirus are reinforcing social inequalities, according to an emergency report. Photograph: Dean Lewins/EPA

The coronavirus pandemic is reshaping primary school education, but the impact of the changes is reinforcing social inequalities, according to an emergency report prepared for educational professionals.

Not all parents have the skills, time or health to help children with distance learning and not all schools and pupils have the necessary technology to enable such learning either, the researchers say.

The survey of almost 3,000 primary school leaders indicated that about one in five primary schools had no arrangements in place to keep in contact with pupils after the closure of their schools was ordered from Thursday, March 12th.

“The survey results highlighted a clear digital divide – [in relation to] hardware, software and technological skills – that exists across schools in Ireland, reinforcing the social inequalities of our society,” say the report’s authors, Dr Jolanta Burke and Dr Majella Dempsey of Maynooth University (MU).

Research for the study, entitled Covid-19 Practice in Primary Schools in Ireland, was conducted among principals and deputy principals almost two weeks after the school closures. It shows the rapid response by most primary schools to put teaching resources and communication systems in place for more than half a million pupils to use at home.

Dr Burke, assistant professor at MU’s department of education, said the research was commissioned by education stakeholders, led by the Irish Primary Principals’ Network (IPPN), to assess the situation early on, “so that they can make evidence-informed decisions about what structures they can put in place to best support school communities in this crisis”.

While just in excess of half of leaders in mainstream primary schools said they believed the closures may have a negative effect on pupils and staff, higher levels of worry were apparent among those with special education classes and in dedicated special schools.

Among those working in schools in the most disadvantaged areas of the State, there was clear concern for pupils’ basic wellbeing.

“Never mind the effect on their education, these children could be starving and spending more time in homes with addiction and violence. School is their safe place,” said one respondent to the online questionnaire.

Many schools were aiming to communicate with pupils at least once a week, as well as keeping parents informed. Respondents said that while parents appreciated school work being organised, many were worried about their ability to support children in doing it.

Parents were “feeling overwhelmed, feeling stressed, as they are working from home also, or trying to look after younger children or a number of children”, said one respondent.

Another respondent estimated that one-third of parents would ensure the prescribed work was done, a further one-third would be overwhelmed and unable to engage with distance learning and the final one-third would “just not bother”.

Teachers have found some areas of the curriculum easier to adapt to online learning than others. Gaeilge was singled out by 80 per cent of school leaders as the most difficult to adapt, while subjects pupils find hard, such as maths, needed more involved and one-on-one teaching, particularly in the senior end of the school.

The chief executive of the IPPN, Páiric Clerkin, said the report describes the “incredible work” of primary schools in responding to the crisis and will help education stakeholders “to refine the supports available to schools, and to clarify what is expected of schools at this very challenging time”.

Voices of primary school leaders surveyed on the Covid-19 closures

“The children will get an unequal education at home despite our gentle direction . . . Difficult for children in troubled families.”

“Our students are some of the most marginalised in our society; school offers them a safe, nurturing environment. They generally do not engage in online learning as they do not have the resources to do so. They get fed healthy meals every day in school and are missing this basic level of care.”

“Fifteen per cent of our children are in homeless accommodation and so are now roombound and have a stove in their room.”

“We’re not putting provisions in place due to lack of broadband and lack of teacher IT skills, including myself.”

“Distance learning was never mentioned in primary education until after we were closed abruptly. It was not discussed at all and no one has training in it.”

“Physical exercise will be seriously restricted. Excessive time spent on consoles will not be good for mental health. Could easily lead to increased cyberbullying.”

“Children with SEN (special educational needs) [will be] most affected. Parents don’t have the skillset to work with these children and the change of routine makes learning almost impossible.”

“The SEN will fall behind academically, socially and emotionally. I wouldn’t be worried about the children in mainstream. They’ll catch up and we will adjust our teaching to cater for that.”

“We have reiterated again and again to parents that children’s happiness is the most important thing.”

“Our teachers are stressing over the welfare of our pupils. They know the homes they come from, they know there is no money for food. They are worried about covering the curriculum too but much less so than [about] the actual safety of the girls.”