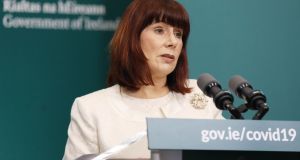 Minister for Culture Josepha Madigan on Friday announced a €1 million fund for artists to make ‘new and original’ works that would be put on the internet for free. Photograph: Leon Farrell/Photocall Ireland/PA Wire

Members of the arts community have further criticised Government measures aimed at helping the sector during the coronavirus pandemic, with an award-winning designer saying last week’s announcement was “tone deaf”.

Minister for Culture Josepha Madigan on Friday said there was a need for “innovative and imaginative” ways to bring “arts and creative engagement directly into our homes and lives” during the crisis.

She announced a €1 million fund, broken down into 334 awards of €3,000, for artists to make “new and original” arts that could be made available on the internet for free. The initiative is being jointly funded from the Department of Arts and the Arts Council’s existing budget, she said.

Some of the winners of The Irish Times Irish Theatre Awards, which were announced on Saturday, were critical of the State response.

“I thought the announcement the Minister gave was extraordinarily ill-conceived and tone deaf in everything it said,” said Paul Keogan, who won Best Lighting Design for the shows The Big Chapel X, The Glass Menagerie and Blood in the Dirt in the awards.

“The gate keepers of culture aren’t just writers and actors, they are visual artists and stage managers, and technicians and lighting designers and crew members. How does a stage manager avail of this Facebook initiative? What is a visual artist meant to do? We have some brilliant technical staff in this country. How do you keep the wolf from the door for these people?”

Ella Daly, producer of Bread Not Profits, which won the Audience Choice Vote at the awards, said theatre artists “need to be in spaces with each other, collaborating, and the Government suggesting we can sit at home and record monologues and put them up on the internet for free is insulting”.

Gary Keegan, who, with Feidlim Cannon, won Best Production for The Examination, said: “The thing we have going for us is that theatre is a live arts form and we should hold onto what we have and not be tempted to put it up online”.

He added: “What they are suggesting is an insult and devaluing of what we do. We should keep creating but not be offering it up for a pittance online. That’s what keeps us apart from TV. We are not content providers in that way, nor in the way social media platforms expect people to be.”

In a statement, the National Campaign for the Arts said they were “extremely disappointed” by the department’s response to the crisis.

“We are dismayed by the lack of vision shown in relation to the arts,” it said, adding that the plans would not apply to many kinds of artistic practice. “This announcement goes nowhere near addressing the fears and concerns of the arts community in Ireland.”

In a statement, the department said Ms Madigan recognises that the pandemic and related public health measures “are having an unprecedented effect on the cultural sector”.

It said Ms Madigan and her officials met organisations from the sector and provided advance funding of €25 million, which had, for example, allowed affected venues to support artists impacted by cancellations.

“The Minister has heard the concerns expressed in recent days, and her department will continue to work with the Arts Council, Screen Ireland and all arts and cultural stakeholders to assess the impacts of Covid-19 on the sector,” a department spokeswoman said.

Idles singer Joe Talbot : ‘Our message is that you’re not alone’
8

Hong Khaou: ‘Vietnam is always seen as a victim. I wanted to show it as it is’
10