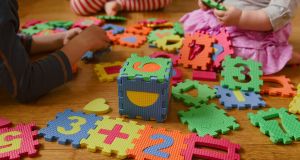 The INMO wants the Government to formalise some of the ad hoc child-minding arrangements that have emerged over recent weeks. Photograph: iStock

Significant numbers of healthcare workers will not be able to go to work in the weeks ahead if the Government does not put in place arrangements for childcare for essential frontline staff, nurses have warned.

The Irish Nurses and Midwives Organisation (INMO) said members were reporting serious difficulties and that it was now imperative that the Government puts in place alternative childcare arrangements following the closure of crèches due to the Covid-19 pandemic.

The INMO said almost as many nurses have been contacting its helpline about childcare difficulties than about concerns regarding personal protective equipment.

One nurse manager who runs a busy unit in a hospital outside of Dublin told the union that where previously she had children covered by the Government’s early childhood education and care scheme, she was now paying €110 per day as part of a private arrangement.

A staff nurse in a large Dublin hospital told the union she was offered overtime regularly as part of the coronavirus pandemic but was barely able to cover her existing shifts due to childcare difficulties.

In a letter to the head of the HSE Paul Reid, the general secretary of the INMO Phil Ní Sheaghdha said: “Many of our members rely on both family and formal childcare facilities as their working hours span the 24-hour cycle. To ensure that they can continue to work it is now imperative that safe alternative childcare is provided to nurses and midwives and that this is not at an additional cost to them.”

Health service sources said the childcare proposal was being led by the Department of Children which would then have to go to the National Public Health Emergency Team and ultimately to the Cabinet.

The Irish Times reported last month that one of the options under consideration by Government was spouses of frontline workers could be provided with extra supports to remain at home as part of a package of childcare supports aimed at freeing up workers crucial to the State’s response to the Covid-19 crisis.

The Department of Children was understood to be working with more than 30 county and childcare committees to potentially match demand between frontline workers, such as nurses, doctors and gardaí, with childcare volunteers across the sector.