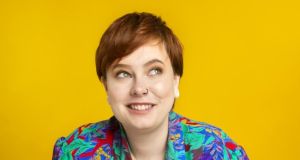 Aoife Dooley says she has received dozens of online threats since her article appeared in a Junior Cert paper this week. Photograph: Ruth Medjber

The Garda has been notified of death and rape threats sent to comedian and illustrator Aoife Dooley after an article she wrote for The Irish Times appeared on Wednesday’s Junior Cert English paper.

The article, a humorous feature about inconsiderate bus passengers, has led to teenagers issuing “dozens” of threats to Ms Dooley.

She said the overwhelming majority of the abuse has come from boys and included naked pictures of underage teenage boys.

Ms Dooley said she was warned that she would have “bricks thrown through her window” and have her “legs cut off”, while another message said she would be so badly beaten that she “won’t be autistic anymore.” Ms Dooley has autism.

She said that she reported it to the Garda for several reasons, including child protection, but would not identify the children in question online because “they are kids at the end of the day.”

Ms Dooley said she was initially happy to appear on the exam paper.

“I thought it was really cool, as they normally only feature people who are well-known. Memes started to crop up and they were funny and lighthearted.

“I have had to shut down my Instagram page and may have to close my other accounts. Social media is essential for me to be able to carry out my work and promote events I am involved in, so this really impact my ability to do my job.”

The original text of the article light-heartedly referred to “the poxes you share the bus with in rush-hour traffic”, including loud talkers and people who eat Meanies pickled onion flavour crisps.

In the piece that appeared on the English exam, however, the word “poxes” was replaced with the word “idiots”. Ms Dooley believes that this word substitution may have caused some readers to misinterpret her meaning.

In a statement, the State Examinations Commission said the treatment Ms Dooley has received was “completely unacceptable by any standard.”

The commission does not consult with authors before publishing their work in a State exam, as to do so could alert students to what will appear on the paper.

The commission added that in cases where articles are edited, the team involved seeks to ensure any amendments leave the piece “as faithful as possible to its original meaning”.

“This includes the need to ensure, as much as possible, that the work is made equally accessible to the wide range of candidates from different backgrounds,” it said.

It added that it considered Ms Dooley’s piece to be an “interesting, thought-provoking and well-written” article that provided an “appropriate stimulus through which candidates could, in their engagement with and response to it, be allowed to demonstrate their critical faculties.”

Ms Dooley, meanwhile, said some of the boys sending abusive messages have been asking for their messages to be screenshotted and put up online..

“They want the attention. I’m afraid to go outside. I’m asking parents to please sit down with their teenagers and speak to them,” she said.

“I know that most students are not sending abuse, and many have sent supportive messages, but this type of bad online behaviour could come back to haunt them in the future. It makes me feel that it must be quite scary to be a teenage girl.”

Ms Dooley is also well-known as the creator of the twitter account @YourOneNikita, which has spawned an animated series on the RTE Player.