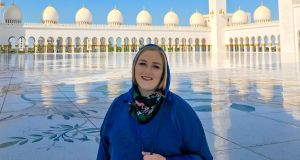 Irish teacher: Denise Somers, who has been teaching in Abu Dhabi for a year, can earn a lot more in the Middle East

To get here you pass close to the new campus of an off-shoot of the Paris-Sorbonne University and the construction site of a sprawling shopping mall which will soon host the world’s largest indoor snow park.

Salaries, which range from €30,000 to €60,000, are tax free. Packages normally include annual flights home, medical insurance and free or heavily subsidised housing

It all seems unfamiliar – until you enter the staffroom and hear the accents of dozens of Irish teachers.

“Our Irish team of teachers really are fantastic; a real asset,” says Gillian Hammond, principal of Repton Abu Dhabi, where about a fifth of the teaching staff are Irish.

“We thank the Irish universities for the impactful training they provide, in ensuring teachers who are skilled and passionate when educating children . . . Irish teacher pedagogy best suits our ethos and vision for a 21st-century education.”

Repton is one of hundreds of public and private schools across the United Arab Emirates, where an estimated 2,000 Irish-qualified teachers are working.

With shortages of teachers causing acute problems at home, the Government is desperate to convince classroom professionals abroad of growing opportunities at home.

Next week the Minister for Education Joe McHugh will touch down in the Middle East as part of new drive to help attract Irish teachers back home with a series of town hall-style meetings.

The attractions of the region are obvious. Salaries, which range from €30,000 to €60,000, are tax free. Packages normally involve free annual flights home, medical insurance and free or heavily subsidised housing.

But with soaring rental costs and rising living costs at home, combined with a profession where it can take years to secure permanency and full-time hours, is there any real prospect of attracting Irish teachers home?

Garrett O’Dowd, a former teacher who worked in Abu Dhabi, set up the international recruitment firm Teach and Explore a few years ago.

He says the average length for Irish teachers in the Middle East is about three years at the moment.

“Many of the teachers receive a two-month bonus once they finish a two-year contract, so many teachers stay at least two years,” he says.

Denise Somers, who has just completed her first year in Abu Dhabi, is the type of person McHugh is hoping to convince to return home.

She graduated in 2016 and moved for job security after struggling to make ends meet in Ireland, where she did insecure short-term cover work.

“At home, I was only paid as a substitute week-to-week and in the summer or over breaks would have to get other jobs to earn money as I didn’t want to have to sign on,” she says.

Now, she says, she has a full yearly contract which includes pay over all the breaks.

“I’m earning more than a third more than what I earn at home. I’ve been given accommodation too, so you can imagine the difference that makes.

“At home, I simply cannot rent my own apartment . . . Here, I am in an amazing one-bedroom apartment with an open-plan kitchen-dining-living room area. They’re actually brand new, fully furnished. There’s a free gym provided in the building.

“I live 15 minutes from my school and about 15 minutes from Abu Dhabi city centre. The area I live in has everything. A corner shop downstairs, supermarket, restaurants, coffee shops, sports facilities and park all down the road.”

Oonagh McCabe, 29, who has been teaching at Repton in Abu Dhabi for the past two years, is the kind of person McHugh is hoping to convince to return home.

She qualified as a teacher in 2010 during the recession, just months before the Government introduced lower pay-scales for new entrants.

It took about three years of working fragments of jobs before she secured a permanent teaching post in Dublin.

The teaching day is also longer, while some schools expect all teachers to take on an extra curricular subject or activity

Even then she struggled to get by due to loan repayments for her master’s qualification, rising rents, car running costs and day-to-day expenses.

“It all felt like a really big strain,” says McCabe. “By the time I’d got a permanent post and established my career, house prices were out of reach . . . I just felt at a crossroads: stay in Ireland and struggle on, or go travelling, advance my career and save for the future.”

Since moving to Abu Dhabi, she says her salary has almost doubled. She has a “beautiful apartment”, free medical insurance and promotional opportunities that were not possible at home.

“My social life is great and I have a great network of Irish friends there, it’s a home away from home,” she says.

She has decided to resign from her permanent job at home and plans to move to Shanghai in August.

“My plan is to teach with a similar package, gain more experience and travel. Eventually, home is where the heart is, but I don’t plan on returning to teach in Ireland in the current climate,” she says.

There are challenges, however. Most teachers are struck by the pressure of the job and a heavy workload that involves more inspections and paperwork, especially in the private sector.

Some schools may have a number of different authorities assessing them. The teaching day is also longer, while some schools expect all teachers to take on an extra curricular subject or activity.

“It is fascinating and exciting – don’t get me wrong,” says Emma Largey (31), who moved from Belfast to Abu Dhabi last year.

“But it can be difficult . . . The parents expect a lot from their children . . . full marks and high results from every test and exam that they do.”

Adam Hannigan from Donegal, who teaches history and geography at a private school in Abu Dhabi, also says work can be more pressurised.

“Parents can be challenging, as they want the best for their sons and daughters. It is not uncommon to wake up to a mountain of emails from parents who are requesting resources or meeting appointments with you,” he says.

There is a large Irish community in the area, with thriving GAA clubs and an active social scene. Alcohol is permitted, and most socialising tends to take place in hotel bars and clubs.

Despite the Irish scene, being thousands of kilometres away from home can be an emotional wrench, says Somers.

Hundreds of teachers here have signed up to attend Joe McHugh’s meetings next week. While most are willing to hear him out, there is widespread scepticism what meaningful changes will be made to make it easier to return home.

People question how “real” many jobs at home that are advertised actually are.

“It’s disheartening applying for jobs when you know the criteria has been specifically written for someone else already in the school or doing the job,” says one teacher, based in nearby Doha.

“There is still a culture of ‘it’s about who you know’ in order to get anywhere within the system.”

As a result, many feel the only real opportunities at home are in providing short-term cover.

“It’s hard,” says one, “You get used to a steady, reliable income out here . . . with substitute work, you don’t know where the work may be each morning, or you end up waiting on the supply call.”

“I would move back if I didn’t feel that I would have to start at the bottom again doing substitute teaching in order to gain a reputation,” says another teacher based in Abu Dhabi.

The struggle to get international service recognised is cited as another major obstacle for many.

Many feel the Irish system turns it back on them when they leave the country and that obstacles are placed in their way by bureaucratic rules overseen by the Teaching Council, the regulatory body for the profession.

“Until these issues are addressed by government, they have only themselves to blame for teachers deciding to work overseas,” says one teacher.

Ultimately, say most teachers, the prospect of a permanent post being available at home would be the biggest draw of all.

Michelle Watters, and her husband – also a teacher – returned to Ireland from Dubai in 2016. Within a year, they were back in the United Arab Emirates. Poor job prospects at home combined with difficulties getting a mortgage meant it was easy decision to leave home again.

“We are living here so that we can return home and have a comfortable life. We want nothing more than our parents to be close to their first grandchild, but unfortunately we will have to wait for this to happen,” says Watters.

“If we knew that we could come home to a permanent job in order to secure a mortgage, we would be back in the morning. Apart from our families and friends, there is very little attracting us back home at the moment.”

In the meantime, says Garrett O’Dowd, international demand for Irish teachers is unlikely to let up.

A recent report by international education expert Pasi Sahlberg indicates that the academic calibre of Irish teachers, along with Finnish, is “among the highest, if not the highest, in the world”.

Much of the expansion in international education is now in Asia, and China in particular. There is also a huge demand globally for maths and science teachers.

“Some Chinese schools are offering very competitive packages at the moment,” says O’Dowd.

“For many of the younger teachers, Dubai and Abu Dhabi are their first choice. But we have had a huge increase in teachers looking to go further east.”