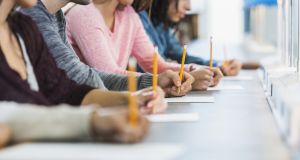 Students sitting the first paper in Higher Level Irish for the Junior Cert on Thursday morning encountered a “very fair paper” that would have pleased many ahead of the afternoon’s second exam in the subject.

“It was probably one of the fairest and broadest papers I’ve seen in many years,” said teacher John Gavin of LeavingCertIrish.com.

“There was lots of choice for all levels of student. Any student who would have had a complaint about today’s paper might not have done much work,” he added.

The two-hour paper was broken into three sections. The composite parts of the paper are the cluastuiscint (listening comprehensionl), the léamhthuiscint (comprehension), trialacha teanga comhthéacsúla (contextual language test) and ceapadóireacht (composition).

Ruth Morrissey, who is TUI subject spokesperson, and a teacher at St Michael’s Community College in Kilmihil, Co Clare said: “I think they had a good range of titles for the essay and for the scéal.”

In previous years the listening comprehension has come in for some criticism both over the accents used and the fact that it is only played twice compared with the other languages where the tape is played three times.

This year however, students thought it “was a good deal easier” with some saying it was easier than the mock tape, Ms Morrissey said.

In the reading comprehension, students were presented with a text about TG4 TV personality Caitlín Nic Aodha and a piece about the Irish language tent (puball) at Electric Picnic, which is one of Ireland’s best known music festivals.

“One of the nicest parts of the paper was the fact that both of the reading comprehensions were extremely fair and certainly accessible to every student who studied their past papers,” said Mr Gavin.

The grammar section was also described by teachers as “extremely fair”.

Here, students were asked to change the tense of a text about poet Nuala Ní Dhomhnaill from the past tense (aimsir chaite) to the future tense (aimsir fháisteanach).

“The students are used to changing the verbs. They would have been used to answering questions in preparation for the oral Irish (exam) along the lines of ’what did you do last weekend’ and ’what will you do next weekend’,” said Ms Morrissey.

The questions on composition were set in such a way that students were able to develop their answers “and illustrate them with a good range of vocabulary,” said Ms Morrissey.

Students were asked to write a page and a half for this question on topics ranging from an occasion when they met a famous person to fashion and friendship.

Overall, the paper was described by Mr Gavin as an “extremely fair and attractive paper” that would have “pleased virtually every student at higher level”.

It featured questions on Stephen Cluxton and Ariana Grande. “There was even something on Tayto Park. I thought it was so apt and appropriate for Ordinary Level students that they would have something that is within their knowledge and range without being too easy,” said Ms Morrissey.

“Rather than having something heavy on politics or on someone who had passed or something they couldn’t relate to,” the questions and pictures that were used “were (topics) that might pique their interest,” she added.