Junior Cert English: ‘A good start to the exams’ 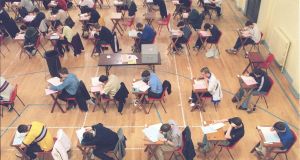 Junior Certificate students emerged happy from their higher level English examination on Wednesday morning after sitting a paper that threw up few surprises.

While this was the third year running that film, which is a compulsory part of the course, did not feature as a question, the exam gave well-prepared students an opportunity to write confidently about elements of the course that they had studied.

The two-hour exam, divided into three sections, was worth 90 per cent of the overall marks, with the remainder based on an assessment task completed during the year.

Kate Barry, a teacher and ASTI subject spokesperson at Loreto Secondary School, in Fermoy, said this year’s paper was “an improvement” on the first exam under the new curriculum.

“The questions are longer and the students are writting at greater length. In the first year of the new curriculum, the exam paper was like a form they had to fill out”.

“As a lead-in to their exams there certainly weren’t any nasty surprises. From my own point-of-view as a teacher that would be very positive,” she said.

Overall, the first exam “was a good start” to the exams for students , she said, but she was concerned that students are not being tested to a greater degree.

“I would be concerned at the lack of rigour in the paper,” she said.

“Even though they have moved to longer answers than when it (the new syllabus) came out first, the fact that they don’t write an essay makes it optional for teachers... and that is not necessarily ideal.”

Another criticism some teachers might have was that some of the questions on the higher paper “weren’t noticeably harder than the ordinary level questions”.

“If anything, some of them were easier,” she said, adding that the section on comprehension could have been more rigorous.

“We would expect more of a challenge at senior cycle - higher level. They should be reading at an adult reading level,” she said.

Nonetheless, her students were “very happy” with the exam paper which she said had “no nasty surprises” and she described as “very doable” .

Students were asked to complete 10 questions in total and were tested on reading and writing with competence; understanding characters and responding imaginatively to texts.

“The questions didn’t catch anybody out and I think that is fair given that the course is very open,” she said.

Last year, students were surprised by the omission of a question about film and those who had expected a question on one of the poems they had studied were asked instead about an “unseen” poem which was printed on the exam paper.

While film was not examined again this year, the paper threw up few other surprises.

The ordinary level paper was “appropriate for the level and not necessarily a whole lot easier than the higher level.”

“There was a nice question where students were asked to write a letter to the principal about an important issue”. There were no surprises on the paper.

Question 8 - 40 marks: By creating characters that express strong views, playwrights can heighten the drama in plays.

(a) With reference to a Shakespearean or a non-Shakespearean play you have studied, outline a key moment when a character expresses a strong view and explain how this heightens the drama in the play.

(b) If you were to stage the key moment you have chosen, explain two things you would do in order to heighten the dramatic experience for the audience. You may refer to aspects of performance and / or stagecraft.