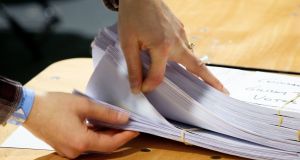 Students were asked in Wednesday’s paper about current issues including lowering of the voting age to 16. Photograph: Tom Honan/The Irish Times.

Students sitting the last Junior Certificate examination to be held on the Civic, Social and Political Education (CSPE) syllabus were met with a “fair” paper featuring questions on matters relating to political figures, voting age and Brexit.

Brendan Greene who is TUI subject spokesperson on CSPE and who teaches St Clare’s Comprehensive School in Manorhamilton, Co Leitrim, described the examination as “a fair paper “ which addressed the core concepts of the subject.”

“It was of average difficulty,” he said, adding that “it was well-geared in terms of what’s happening around the place.”

The subject is taught to give students an understanding of the civic, social and political dimensions of their lives and CSPE teachers fear the subject is being downgraded under the Junior Cert reform programme.

“Looking at it as a teacher of the subject I thought the paper was a loud call to the politicians to save the subject of CSPE.” Mr Greene said.

One question which caught the eye was 4c in Section 3 where candidates were asked to give their opinion on the demotion of CSPE as an examinable subject.

Students were asked to write a letter to the Minister for Education giving their opinion on its removal from the list of examinable subjects.

“I thought it was a brilliant question for students to articulate on,” Mr Greene said. “If a subject is assessed by the State it has an awful lot more value than something that is just seen as wishy-washy.”

“This is the last chance students will have to acquire knowledge in the education system about politics. They can do politics and society at senior level but that will be a minority subject for a long time to come,” he added.

Students were asked in Wednesday’s paper about current issues including the use of coffee cups, plastic straws and global goals “which is very much in the media in recent times.”

The issue of Brexit featured in Section 3 where candidates were asked to detail arguments in favour of and against Ireland leaving the EU.

“That was a nice way of bringing in the Brexit issue,” Mr Greene said.

Section 3. Q 4 (c) 2019 is the final year CSPE is being examined in the Junior Certificate Examination. You would like to give your opinion on this change. Write a detailed letter to the Minster for Education and Skills clearly stating your opinion. Explain in detail two reasons for your point of view.