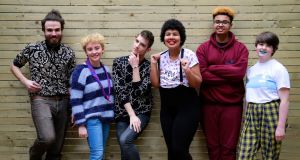 On Saturday afternoon nearly 100 young people aged between 15-30 from youth groups across Ireland gathered in Dublin to discuss the key issues affecting Irish youth today. The Young Voices consultation, organised by the National Youth Council of Ireland (NYCI), brought together spokespeople on issues such as education, access to work, advancements in technology, LGBT rights, rural isolation, gender equality, mental health and disability rights to exchange ideas ahead of the EU Youth Conference in Sofia, Bulgaria. The Irish Times spoke to a group of participants about the changes they feel are needed to create a better Ireland for future generations.

Dan Airey, a student in Creative Digital Media at the Institute of Technology in Tallaght, says Ireland has “a long way to go” on the road to becoming a country where wheelchair users feel welcome. “People still see us in a different light. I’m trying to show others that people in wheelchairs are a lot more than just their chairs. I’ve seen other people with disabilities who only feel they can talk to their carer and not to other people. I have friends who are quadriplegic but they still understand people. It’s about inclusion and working together.”

Airey has found that most buildings across Ireland remain largely inaccessible to wheelchair users and says the construction industry, and more importantly members of Government, are still not paying attention to the needs raised by disability awareness groups.

“We’re the generation that needs to move this issue forward. Leo Varadkar needs to put the building blocks in place so that we are in a position to take over and build our future. If they ignore us all this work is pointless. It doesn’t matter where you come from and what your background is, you still have a voice. Even people who can’t speak have a voice, they still have thoughts in their head that are important. It’s just that everybody needs to take the time to listen so they can gain that extra perspective.”

When Nengi Benstowe moved to Ireland eight years ago her plan was to pursue a degree in biomedical science before moving on to a postgraduate degree in medicine. She arrived in the country with a scholarship to cover her education costs but after completing her undergraduate studies she discovered the funding for her masters was no longer available. She fell into a deep depression and felt unable to turn to anyone for help. She simultaneously had to deal with the death of her father back home in Nigeria.

“Depression is an area people still shy away from but it’s very real and it can cost you your life. When the scholarship was no longer in place I found myself in massive debt and my life was thrown out of balance. I thought I could handle the pressure but it was way too much. The only reason I survived that experience was because someone who had been through something similar stepped in and helped me through it.”

Benstowe, who recently completed a Masters in business administration and is now working in accountancy, says many young people still choose to hide their problems rather than speaking to an adult or peer about their struggle. She hopes her participation in the Young Voices event will help highlight the importance of supporting and encouraging mental health support and education.

“There’s still a need to speak about mental health and support young people in this area because a lot of people in the older generation can’t fully understand what we’re going through. Young people need to find people to speak to because otherwise they could end up taking their lives when they feel they can’t handle the pressure.”

Harry McCann has spent the past four years of his life totally immersed in the world of technology. When he was 15 he set up a business to teach children computer coding and in 2014 he founded the Digital Youth Council which promotes the important of Stem (science, technology, engineering and maths) subjects to young people across Ireland.

McCann say 90 per cent of the time technology is an entirely positive tool and that access to the internet allows you to meet interesting people, investigate employment opportunities and develop business ideas. He says the negative, more dangerous aspects of technology could be avoided if policymakers provided proper digital education at primary and secondary level education.

“We offer sex education because it’s a part of life, it’s going to affect all of us. The same needs to happen with digital education.” He says a ban on smartphones for under 16s would be pointless and that education is the only way we can ensure children use the internet in a safe way. “When you hop in the car you always have the risk of crashing but we don’t ban people from driving cars. We educate them on how to be safe and responsible drivers. We need to do the exact same with technology. By brushing it under the carpet we don’t gain anything.”

Without proper digital education, the risk of online grooming will continue to be a threat for all children using the internet, says McCann. “We’ve reached this point because up until now we’ve refused to take responsibility for young people online. We’re not making parents and teachers properly aware and all this has built up to the case of Matthew Horan which we saw this week. But technology also creates opportunities. It allows you to discover who you really are. That’s the great thing about the online world, there’s no boundaries or limitations.”

Last September, the 2016 census results revealed that more Irish people were still choosing to leave Ireland rather than return home. Vanessa Mulhall, a youth worker with Foróige, says there will always be plenty of young Irish people eager to move abroad, even when there are jobs available. However, she adds that most young travellers say they eventually plan to settle in Ireland.

“From speaking to young people I’ve found a lot of them want to stay in Ireland. But people over 18 and under 30 will always want to experiment with moving away to see if they can find a better lifestyle.” Mulhall warns that Irish schools are failing to educate their students on the types of opportunities that exist outside traditional pathways into employment. “There needs to be a break in these traditional routes and schools should be more open about jobs. I don’t think entrepreneurship is being promoted properly at school level.”

Asked if young people are being pushed abroad by the rising cost of living in Irish cities, Mulhall says many are choosing to move back home with their parents as a means of saving for a deposit. “Some of the girls on my football team had to move back because they couldn’t afford the rent. This can be challenging for families but if you talk it out with your parents there can be an understanding of how difficult it is to afford to live in this day and age. I think it’s a very exciting time to be joining the workforce but people still need to earn a living, we need some sort of economic security.”