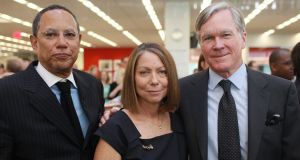 A former executive editor of The New York Times has been appointed as adjunct professor at DCU’s school of communications.

Jill Abramson was the first female executive editor in the newspaper’s 160-year history, holding the role from 2011 to 2014.

Ms Abramson’s appointment at DCU is for a two-year term and she will be the keynote speaker at a major international conference being held at the university later this year.

Professor Kevin Rafter, head of the school of communications at DCU, said: “In her role as adjunct professor, Jill Abramson will bring her wealth of experience as DCU revamps its teaching in the areas of media, journalism and communications.”

She is currently teaching journalism at Harvard University and also writes for international publications, including a regular political column for The Guardian.

Over a seventeen-year career at the The New York Times, Ms Abramson served as Washington bureau chief and managing editor.

She is the author of three books, including Strange Justice, co-authored with Jane Mayer, which examined controversy surrounding a US Supreme Court confirmation hearing.

In addition to her current position as a lecturer in Harvard, Jill Abramson has taught at both Princeton and Yale.

She is a member of the American Academy of Arts & Sciences and The American Philosophical Society.