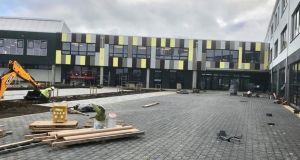 It is likely to take a “few weeks” to resolve uncertainty over the completion of up to six major school-building projects following the collapse of a UK construction firm, Taoiseach Leo Varadkar has said.

Carillion was a key member of a consortium which is delivering a number of school projects in Ireland under a State-funded public-private partnership programme.

While State authorities last week said they did not envisage any “material delay to the works”, work has been postponed indefinitely this week at a number of school construction sites.

Mr Varadkar told the Dáil it was likely to take a “few weeks” to resolve the issue, which was a priority for the Government, Department of Education and the National Development Finance Agency.

The other main shareholder in the public-private partnership is Dutch Infrastructure Fund (DIF), a fund management company. It said on Wednesday that it was “inevitable there will be a delay while dealing with the subcontractors and all other stakeholders in the projects”.

It added that it was surprised at the speed of the UK’s company’s collapse, but wished to resolve the situation as quickly as possible.

“We appreciate how disappointing this must be to parents, pupils, the local authorities and other stakeholders, but we are currently speaking to everyone involved in order to try and find a way forward,” DIF said in a statement.

“DIF would like to reassure all those in the areas where the schools are being built that we are working as hard as we can to try and find a solution. We will be able to keep you updated as the situation develops over the next few weeks.”

A key issue facing the Dutch company is finding a replacement partner to maintain the school buildings over the next 25 years, a role which Carillion was due to fulfil.

There is a commercial imperative on the company to do so, as it will not get any State payments until the projects are handed over to individual schools.

The National Development Finance Agency, which is managing the building contracts, said it was up to the consortium’s funders and remaining shareholders to intervene and implement rectification measures to ensure the projects were completed.

It said discussions between the parties were in progress, and every effort was being made to ensure delivery of the schools in as timely a manner as possible.

School principals have expressed frustration at the delays, given that some were due to move into their school buildings this week.

He said currently students in the school were moving from one class to the next between an older building and temporary prefabs.

Billy O’Shea, principal of Loreto College secondary school in Wexford, said teachers and students have been waiting 19 years for a new premises. While the new building was “virtually finished”, he said students was saddled with an outdated building with no PE hall, library and inadequate classrooms.

Fianna Fáil education spokesman Thomas Byrne said there had been “poor leadership” from the Government on the issue, which last week had said it was “confident” that the schools would not be affected by the collapse.

In a statement, the Department of Education said every effort was being made to ensure delivery of the schools in as timely a manner as possible.