Is Covid-19 testing and tracing system for schools fit for purpose?

Flaws in public-health response to cases are major cause for concern, school leaders say 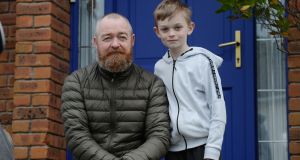 Seamus Keane and his son Fionn. The nine year old tested positive for Covid-19 after a case was confirmed in his class, though had not been identified as a close contact of the positive case. Photograph: Alan Betson

When a case of Covid-19 was confirmed in nine-year-old Fionn Keane’s fourth class, the Health Service Executive did not identify any close contacts in the classroom. The following day, a Saturday, Fionn developed a slight temperature and his father, Séamus, called his GP. Fionn was referred for testing. The result came back positive.

“The only way that he could have contracted Covid, as far as I can see it, was in the classroom,” said Keane.

However, as Fionn had not been considered a close contact of the initial positive case, the possibility of school-based transmission may not have been considered.

“I had no contact from the HSE regarding my request for him to retrospectively be deemed a close contact,” said Keane.

The proportion of close contacts who have tested positive is between 2 per cent and 3 per cent, significantly lower the equivalent figure for the wide community. This, according to the HSE, indicates that schools are not amplifying the spread of Covid-19.

However, the practice of identifying close contacts in schools has become a cause for concern among many school principals. They believe there is a disconnect between the HSE’s understanding of school environments and the realities of classroom interactions.

Delays in identifying close contacts of positive cases have also damaged the confidence of school leaders in the wider testing and tracing programme.

This, in turn, has prompted some worried principals to take matters into their own hands by closing their schools for safety reasons or allowing pupils to stay at home following outbreaks.

A key areas of concern among school leaders is how close contacts are identified following a positive case in a school.

Public-health authorities deem a person in an educational setting to be a close contact if they have spent more than 15 minutes within one or two metres of a confirmed case, with consideration of other mitigation measures such as face coverings, pods, ventilation, etc.

Contacts are identified from their proximity to a confirmed case during their “infectious period”, which is defined as 48 hours before the onset of symptoms if symptomatic, or 24 hours before a Covid-19 test was taken in those who are asymptomatic.

Ultimately, it is down to public-health authorities – not schools – to identify who these close contacts are.

However, some principals believe the criteria for identifying close contacts in schools for testing are too narrow and are keeping the positivity rate unrealistically low.

“Primary schools are far more complex organisations than people perceive them to be,” said Simon Lewis, principal of Carlow Educate Together. “In reality, the whole pods and bubbles system is a bit of a farce.”

He feels there is a lack of transparency over the process of identifying close contacts.

“Please explain it to us,” said Lewis. “When it doesn’t logically make sense, the only thing principals can do is be as transparent as we can in the face of the lack of transparency that is available to us.”

Lewis was notified in recent weeks of two positive cases in his school by a family. The initial communication from the public-health adviser was to send the pod home, however, Lewis believed this didn’t take into account the complexity of interactions that had occurred.

“There wasn’t an in-depth questioning,” said Lewis. “We have children who come on buses, there are variables that exist, but the default setting seemed to be to just send the pods home.”

Lewis said he had to ‘lead’ the public-health doctors to the close contacts.

“Once I gave them the information in fairness to them there was no disagreement,” said Lewis.

In response to claims of inconsistencies in the definition of close contacts across schools, the HSE said the risk-assessment process relied on a range of information gathered by public-health teams which can lead to different conclusions over the number of close contacts.

Dr Abigail Collins, a consultant in public-health medicine, told a recent HSE briefing that public-health teams work hard to balance what is reasonable with what is necessary in limiting the spread of the virus.

“Schools are very important places. If you designate someone a close contact you are automatically excluding them from education for two weeks and exclusion is harmful and undesirable.”

Séamus O’Connor, principal of Scoil Bhríde, in Crosshaven, Co Cork, said his school has had two teachers and a SNA who tested positive for Covid-19.

A teacher who was not identified as a close contact by the public-health team sought independent advice and tested positive.

“The staff member sought advice on testing from their GP and was referred for testing,” said O’Connor. “If they didn’t get tested they would have walked into school asymptomatically carrying Covid.”

In some cases the teacher can be ruled out as a close contact because they are wearing a mask, but principals believe this is out of sync with advice around personal protective equipment.

A spokesperson for the HSE said that the mask was only one of the factors the public-health team considered when making a risk assessment, and they also gathered information from the principal.

“Masks are a part of the preventive armament but not the only one or the most important; and a combination of factors are considered when assessing who needs to be tested.”

Another issue fuelling anxiety around schools is the delay in receiving notification from the HSE once a positive case has been reported in the school community.

More than 15 per cent of principals who participated in the survey from the National Principals’ Forum reported that they were waiting over four days on communication from the HSE.

“They were left in that terrible position where their hands were tied with GDPR and confidentiality,” said Angela Dunne, principal of Loughmore national school, Co Tipperary, and a member of the forum.

Dunne reports that many principals have reported significant decrease in attendance in schools when communication isn’t prompt.

“The school would have written to [parents] to say the HSE would be in touch about close contacts, but parents didn’t hear anything from the HSE. They decided to keep their child out because they didn’t feel that it was safe,” said Dunne.

Lewis said lack of swift communication with schools over Covid-19 cases can cause huge uncertainty.

“You’re in this sort of limbo period where you are waiting for instruction,” said Lewis. “Then you have the fear of the hysteria that comes from people wondering why the school are not doing anything.”

The HSE that a rise in overall cases in the community had had an impact on its response time to schools last month and acknowledged the need for a “swifter reaction”.

Along with increasing the number of school support teams – aimed at speeding up contact with schools – the HSE has introduced a text-messaging service for parents in cases where their child may be listed as a close contact. There are also weekly briefings with education partners.

The measures have been cautiously welcomed by school leaders – though some still believe there are many variables not being considered in relation to contact tracing in schools.

Unions such as the Association of Secondary Teachers in Ireland (ASTI) have warned that they are prepared to take industrial action unless they can be confident that schools remain safe.

“We need much more progress in order to get to the point where teachers believe that the safety of students and teachers is being prioritised during this pandemic,” said ASTI president Anne Piggott.