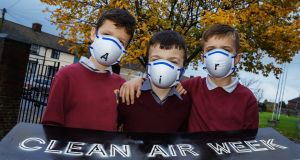 Dozens of schools are set to introduce “no idling” zones in the coming week as part of a campaign aimed at combating air pollution caused by cars left running when dropping off and collecting children at school gates.

It follows concern over the high levels of nitrogen oxides, which are traffic pollutants, outside some urban schools.

The campaign also comes at a time when some local authorities have introduced special “school zones” using pencil bollards to discourage parents from stopping at schools and free up space around schools for children to cycle and walk, in response to the Covid-19 pandemic. In Dublin City Council alone, more than 80 schools are in discussions with the local authority over introducing such zones.

Students in primary and secondary schools across Ireland are this week hosting “no idling” zones to draw attention to the air pollution problem as part of a campaign under Clean Air Week, an annual event run by An Taisce Green Schools.

“Clean air is a human right; however, it is not something many children in Ireland experience on their journeys to and from school,” said Jane Hackett, manager of the Green Schools Travel programme.

Idling in a car creates worse emissions than driving because when a car is being driven, the engine heats up faster, allowing the catalytic converter to be more efficient at reducing emissions.

Contrary to popular belief, car engines do not need to be kept warm by leaving the car running when stopping for short periods of time.

The Clean Air Week campaign, now in its second year, looks at the high levels of nitrogen oxides (NOx) around school gates.

More than 60 schools took part in a campaign during the 2019/2020 academic year which measured NOx at three different locations in their school grounds.

Although levels of NOx were found to be below the threshold of unacceptability set by the World Health Organisation and the EU, schools located in cities and suburbs recorded higher levels than those in small towns and rural areas.

Young people are arguably more susceptible to air pollution than adults, due to their smaller size, developing physiological systems and closer proximity to fumes from cars. This is particularly the case for smaller children in buggies.

“We know that one in five Irish children experience asthma at some stage in their lives and this is directly linked to poor air quality,” said Ms Hackett.

In response to the Covid-19 pandemic, local authorities strove to create more space for walking and cycling so that people could follow social distancing guidelines.

The team at the An Taisce Environmental Education Unit is particularly encouraged by efforts by some local authorities to introduce the “school zones” using pencil bollards to free up space for cycling and walking.

“Dublin City Council has taken this on board, with more than 80 schools in Dublin interested in getting school zones. Even during the pandemic, schools understand the value of walking and cycling to school,” said Ms Hackett.

For Clean Air Week 2020, spoken word artist Sasha Terfous has penned the poem My Promise to inspire young people to contemplate how air quality impacts on their lives and to enter the Clean Air Week poetry competition.

During Clean Air Week, schools can download a “no idling” toolkit and an air quality resource from ggreenschoolsireland.org.