Just 2,800 candidates registered for exams which begin on Monday evening 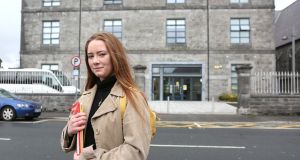 Kate Ryan, one of about 2,000 students due to sit the delayed Leaving Cert exam, outside the school she attended, Coláiste Iognáid at Sea Road in Galway city. Photograph: Joe O’Shaughnessy

Kate Ryan was in the middle of her Leaving Cert studies last March when her school suddenly shut.

Eight months later and the 19-year-old is still revising her dog-eared textbooks and scribbled notes in preparation for the exams.

“I definitely never thought I’d end up sitting the exams on a dark, windy November evening ,” says Ryan, from Galway city. “It’s going to be strange.”

The delayed Leaving Cert finally gets under way on Monday – and it will be unlike any other.

Just 2,800 candidates are registered to sit it compared to 61,000 who were due to sit the June exams.

For most, it won’t be the traditional, marathon slog; students are sitting an average of just two to three subjects each.

Most exams will take place in classrooms rather than draughty exam halls due to the small numbers.

The exams are taking place during weekday evenings – starting at 5.30pm – and weekends – starting at 9.30am – to facilitate students who have started college courses.

Candidates will be required to wear face masks and sit at desks spaced at least 2m apart.

Biology, the first subject, is the most popular exam, but many subjects will have only a handfuls of students sitting them. In all, exams will take place in about 600 out of the 740 secondary schools.

It may all seem like a lot of effort for a small number of pupils – but the Government committed itself to holding exams when it announced a new calculated grades system was being introduced due to coronavirus health restrictions.

Students received these grades last September, based on their teachers’ estimates and a standardisation process overseen by the Department of Education.

However, many who were unhappy with their results or missed out on their chosen college courses have chosen to sit the Leaving Cert exams , which run until December 11th.

In addition, a small number who chose not to receive calculated grades at all – typically adult learners – have opted to sit the exams, while another group of students – about 200 – were unable to get calculated grades for subjects they took outside school.

The exams give students a once-off chance to maximise their points by combining their best results from their calculated grades and written exams.

If a student becomes eligible for a college place on their chosen course based on the CAO points in 2020, they may start next autumn.

Any student who has already started a college course and becomes entitled to a higher-preference course based on their CAO choice will be able to begin the new course next year, without any financial penalty.

That’s the situation Kate Ryan is in. She narrowly missed out on her dream course – medicine – based on her calculated grades.

“Most people sitting the exams, as far as I can see, are in the same boat,” she says. “They’re not aiming to pass; they are aiming to do better than the calculated grades they received in order to get courses they really want to do.”

She still feels frustrated at the decision to delay the exams and provide calculated grades.

“It’s one thing missing out on a course after sitting an exam, but it’s even more crushing when it’s a process you have no control over.”

Countries such as South Korea managed to hold their exams in April, with staggered starts and a range of health precautions, she says. These options, she feels, should have been explored in Ireland.

The department says the decision to provide calculated grades was taken with the best interests of students in mind and with the full agreement of education partners. It also says the exams – if they had gone ahead – would have been truncated in length and unlike anything which students would have prepared for.

Kate Ryan ended up receiving 578 points with her calculated grades, falling just shy of the entry requirements for medicine at NUI Galway.

She secured a course in genetics and genomics at NUI Galway, which she loves, but her dream of studying medicine remains.

“I’ve always wanted to pursue something in science which deals with people and involves fixing problems,” she says.

She is due to sit French and physics over the next week and hopes she will secure an extra 20 points and qualify for medicine next year.

While in normal years there is a “bell curve” in the marking process, in which students’ results are adjusted or standardised for consistency, this will not be the case in these exams.

“We have appointed very senior and experienced examiners to mark these examination papers,” said Andrea Feeney, chief executive-designate of the State Examinations Commission, last week. “. . . We are not looking at a statistical norm, but at the expert judgment brought by the examiners.”

Meanwhile, Kate Ryan is focusing on the job at hand – and counting down the days to when she can finally put her Leaving Cert books away for good.

“I’m in robot mode now, trying to juggle my coursework and Leaving Cert study . . . it feels like the last hurrah now. I just want the saga to be over.”