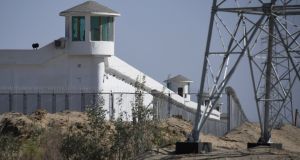 A facility near what is believed to be a re-education camp where mostly Muslim ethnic minorities are detained in China’s northwestern Xinjiang region. Photograph: Greg Baker/AFP

Academics in University College Cork (UCC) have expressed concern about plans to deepen links with a controversial university in China.

Fifty academics from the university have signed a letter seeking a detailed report on whether Minzu University in China is linked to human rights abuses against the Uighur people in Xinjiang, and other minority groups.

Minzu University is used by the Beijing regime to educate students from ethnic minorities, many of whom go on to become Chinese Communist Party (CCP) officials or cadres.

Formerly known as the Central Nationalities University, it has a special focus on ethnic studies.

A large proportion of its students are from non-Han Chinese backgrounds, including Uighurs from the Xinjiang region, where the CCP regime is involved in an unprecedented campaign of oppression.

A steering group in UCC is looking at making a “joint college” application to the Chinese ministry of education in relation to Minzu, with which UCC already has academic links.

“We are gravely concerned about human rights abuses frequently reported in China, specifically in this case regarding the treatment of ethnic minorities such as the Uighur people in Xinjiang province,” the academics said in the letter to UCC interim president, Prof John O’Halloran, and the academic secretary.

Noting UCC’s commitments under the Human Rights Principles and Code of Conduct of the National University of Ireland, they called on the steering group to “address in full and in detail the issue of Minzu University’s relationship to, and role in, the documented human rights abuses, including the issue of facial recognition software, DNA research, and suppression of religious and academic freedoms”, and to report to the university authorities, including the Academic Council.

In October an academic at University College Dublin told The Irish Times that the move being considered by UCC in relation to Minzu raised “huge ethical questions”.

“Co-operation with Minzu University – designed to focus on ethnic minority education – raises huge ethical questions as China’s ethnic minority policy has become one of the most oppressive in the world in recent years,” said Alexander Dukalskis, an associate professor in UCD’s school of politics and international relations, and China fellow at the Woodrow Wilson Centre in Washington DC.

“I think it’s difficult to justify deepening co-operation with a university focusing on ethnic issues overseen by the very same party that is simultaneously putting ethnic minorities in re-education camps in vast numbers in Xinjiang or systematically suppressing Tibetan culture.”

The world’s most famous jailed scholar, Ilham Tohti, was a professor in Minzu, the academic said.

Tohti, a Uighur economist who lectured in Minzu, was jailed for life in 2014 by the Chinese regime, who accused him of “separatism” and fanning ethnic tensions. Tohti is widely considered to be a moderate on the Uighur issue.

There was no response from UCC to a request for a comment about the letter.

“Discussions with Minzu University of China do not include the development of a physical campus by UCC, and any agreement will be subject to university approval,” the university said in a statement in October.

UCD and Maynooth also have joint college arrangements with other Chinese universities.