Students from abroad campaign for rebates on their fees of up to €25,000 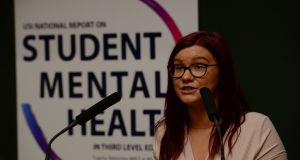 Lorna Fitzpatrick, president of the Union of Students of Ireland, said a sharp decline in State investment in higher education per student has led to universities becoming over-reliant on student fees as a source of income. Photograph: Alan Betson

Universities risk reputational damage due to “extravagant” fees being charged at a time when most learning has shifted online, a seminar organised by the Irish Council for International Students has heard.

While domestic undergraduate students pay fees of up to €3,000 a year, the cost can rise to €25,000 for international students or €55,000 for medical students from abroad.

Lorna Fitzpatrick, president of the Union of Students of Ireland, said a sharp decline in State investment in higher education per student has led to universities becoming over-reliant on student fees as a source of income.

“There is a risk in terms of reputation, most definitely. I don’t think that is solely linked to fees, but that is true in relation to the broader student experience as a whole,” she said.

Her comments come as hundreds of international students at UCD campaign for a 30 per cent cut in their fees due to the lack of on-campus lectures this year.

Almost 500 international students at UCD’s Michael Smurfit Graduate Business School, have signed a petition stating they they gave been “treated as a source of finance, used only to pump money into the economy”.

The cost of the main master’s finance course at the school is just over €18,000 for EU citizens and almost €24,000 for non-EU students.

In addition, more than 70 per cent of graduate entry medicine students at UCD say they are withholding fees in protest over fees and disruption to learning. Fees stand at €16,290 for Irish students and €55,140 for non-EU students.

In a statement, UCD said it had no plans to provide refunds for courses.

“The costs of delivering UCD programmes have not reduced, the learning outcomes of the programmes will not be diminished and the value of the UCD qualification to the students after graduation will also not be impacted, and so the university will not be rebating tuition fees,” a spokeswoman said.

She said students who have paid for campus accommodation but who decide to go home are rebated their rent on a pro-rata basis.

The spokeswoman added that the university announced that it plans to commence the spring trimester on the assumption that at least Level 3 of the Government restrictions will apply.

However, if the national situation improves, schools will be supported in providing face-to-face on-campus activities where they consider it “educationally appropriate” to do so, subject to health and safety guidelines for students who can avail of it.

Speaking at the Irish Council for International Students seminar, Louise Staunton, global officer manager at Trinity College Dublin, acknowledged that it was a very challenging time for students.

However, she said while the learning experience was different, the “lights are still on, the lectures are still there and preparing, and administrators are working behind the scenes”.

These students are ambassadors for Irish education and it is important to ensure they have the best possible experience, she said.

Latest figures indicate that the number of international students enrolled in Irish universities has declined this year, but not by as much as had been feared by institutions.

Provisional figures indicate the decline ranges from about 4 per cent at the Royal College of Surgeons in Ireland to 35 per cent at Technological University Dublin.