Write stuff: How authors are boosting creativity in the classroom

An education scheme is helping children see writers as living, breathing people rather than mythical beats 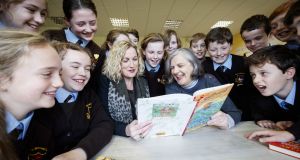 It’s Friday afternoon, an hour before school closes, but the fifth class students at St Clare’s Primary School in Harold’s Cross betray no giddiness as the weekend approaches.

The desks in their brightly-lit classroom are piled high with books: maths and science books, dictionaries and thesaurus, and stacks of dog-eared novels; a compendium of classics and contemporary fiction.

There’s David Walliams and JRR Tolkien, Jacqueline Wilson and Michael Morpurgo. The students in this class really love reading, but today they are more interested in writing: more specifically in meeting a flesh-and-blood writer, Siobhán Parkinson, former Laureate na nÓg, who has just arrived to lead a workshop in creative writing.

Parkinson is one of the 200 writers currently participating in the Writers in Schools Programme, which celebrates its 40th anniversary this year.

Since Bryan McMahon visited the Convent of Mercy School, Limerick by the Arts Council in 1977, nearly one million young people in 4,000 schools have reaped the benefits of this unique arts-in-education programme, which brings writers and storytellers to primary, secondary and special schools across the island.

For many, the Writers in School scheme will be the first contact a child will have with a living author.

As Parkinson explains: “It’s a bit of magic coming into the classroom. It creates a bond with books that you could never get reading on your own.”

The pupils at St Clare’s, however, are a highly-literate, widely-read bunch, who have been lucky enough to meet dozens of authors in person in their short lives.

Novelist Mary Costello is a former teacher at the school and she regularly visits to lead writing workshops with the children, while the school has been participating in the Writers in Schools scheme for more than a decade.

The enthusiasm for engagement has spread outside the classroom too, and many of the pupils seek out author engagement in their free time.

Ten year-old superfan Isobel Kelly saw Jacqueline Wilson interviewed at the RDS last year, while Matilda Murray queued up to get books by her favourite author, Judi Curtin, signed at the Bantry Book Festival in July.

For pupils that are not as lettered as those in St Clare’s, however, meeting a writer “demystifies the idea of writing for them”, as Parkinson explains.

“They see that a writer is not a mythical beast but a living breathing person, and that sense of contact is crucial for them seeing the potential in themselves, seeing themselves as creative beings.”

Over the years that Parkinson has been involved, the Writers in Schools scheme has developed “two different strands. There is the standalone author visit, which typically involves an author reading from their work, with a structured questions-and-answers session to follow. Then there is the more long-term approach, which works like a mini-residency.”

The children may start off slightly cowed by the idea of a professional writer, but as the relationship develops “they forget that you are a ‘real writer’. You become a facilitator for their own creative engagement. They are the writers now.”

Parkinson says the benefits of long-term engagement are particularly important to those who “struggle to believe that they can write. Even children who see themselves as readers can find it difficult to see themselves as writers.”

For those reluctant to participate, collaborative projects are key, ensuring that “everyone has an input: those who have confidence and those who don’t. By the end you see a huge upsurge in self-belief and satisfaction. That everyone can say ‘that’s my sentence’, gives each person a real sense of achievement.”

Ten year-old Sean Morris, who is writing his own version of Chronicles of Narnia in his spare time, is keen to point out the pitfalls of the collaborative approach too.

“It can be a bit tricky,” he pipes up. “There are always disagreements, about the characters or the plot.”

Parkinson believes there are key benefits to the fact that she is an outsider coming into the classroom. “It gives the [pupils] freedom to think a bit differently,” she says.

“Children are used to behaving a certain way in school – to use capitals where appropriate, or the right colour pen – and in the workshops they are allowed to let go of those more formal aspects and just indulge their imaginations.”

The palpable excitement in the classroom as Parkinson comes in certainly confirms the energy brought by this new dynamic.

The presence of the professional writer in the classroom has benefits for the teacher too, says deputy principal, Phyllis Moran.

“By observing the writer work with the students,” she says, “the teacher gets ideas for how to work creative writing into their own lessons, and she also learns how to bring ideas out of the children.”

Although the curricular links are not formal, the benefits in the classroom are concrete.

The pupils are “reading more widely”, Moran says. “They are developing their vocabulary and learning about the structure of writing. And that follows through in the different genres of writing they engage with at both primary and secondary level, from recount writing to procedural writing.”

Fifth-class teacher Carmel O’Connor gives an example of how the creative approach can be used in different ways within the classroom.

“The students were working on procedural writing,” she explains. “First we looked at examples of a few different sets of instructions, and students learned to identify different features of the writing. Then we did a group project, producing a manual collaboratively. Then the students followed through with an individual project and they could do that on anything they wanted.”

In the end they produced a wide variety of instructional manuals on diverse subject matter, from how to bake a cake to how to make a stone giant. “In that case, we used elements of creative writing to make procedural writing fun.”

Moran is also eager to point out that the benefits don’t just apply to what the students put on the page.

One of the previous writer-visitors to the school was Aideen O’Brien, who ran a workshop with all classes on “The Art of Storytelling”. She focused on oral storytelling and it culminated in pupils performing their own work.

The public nature of the performances, Moran says, was “a real achievement of confidence. The sort of experience that will stay with them forever.”

Living poet’s society: ‘The fact that you can meet living poets is invaluable to engaging students’

Not so long ago there was one thing common to virtually all novelists or poets that featured on the curriculum for the State exams: they were dead.

These days, however, the expansion of the Junior and Leaving Cert courses means there are many contemporary authors.

With the Writers in School scheme, there is now a chance for many students to meet the authors they are studying for the first time.

Jane O’Hanlon, Poetry Ireland’s education officer, says this can be invaluable to engaging students with the medium.

“It brings something they see as difficult alive in a very real way and that makes a big difference. It’s a pity they don’t get on so well with the dead ones.”

The Writers in Schools scheme is administered for the Arts Council by Poetry Ireland which recruits, trains and mentors the artists involved in the scheme.

Around a third of writers in the scheme’s directory are poets, says O’Hanlon, while poetry workshops account for at least half of all residencies.

Poetry is a particularly attractive medium, she says, because “you can achieve a lot in a short time. So you find that even non-poets will use poetry, as it gives a sense of completion to workshops.”