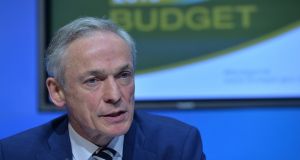 The sharp growth comes as policymakers seek to expand the Irish apprenticeship and traineeship system following a dramatic collapse during the economic downturn.

About 60 per cent of school-leavers in the State currently progress to higher education, one of the highest rates in the EU.

By contrast, just 2 or 3 per cent of school-leavers are pursuing apprenticeships as a route into work compared with countries such as Germany where the figures are closer to 60 per cent.

Last year also saw the introduction of a number of new apprenticeships in areas such as accounting, financial services and hospitality

New figures compiled by Solas, the umbrella body for the education and training sector, show apprenticeships jumped from 10,445 in 2016 to 12,849 last year, a 24 per cent increase.

While the growth in numbers is encouraging, there remains a major gender gap.

Last year just over 1 per cent of those in apprenticeships were female. Nonetheless, this almost represented a doubling from 0.6 per cent the previous year.

Last year also saw the introduction of a number of new apprenticeships in areas such as accounting, financial services and hospitality. Numbers in these apprenticeships grew from 70 in 2016 to 391 last year.

Major growth is expected in this sector as dozens of new apprenticeships come on-stream in new areas such as cybersecurity, animation, systems engineering, horticulture and sport turf management.

They will range in skill level from level five (certificate) to level 10 (doctorate) and vary in duration from two to four years.

The Government has pledged to more than double these “earn and learn” enrolments to 14,000 by 2020.

In all, a total of 26 new programmes are due to be announced on Friday which will be developed over the next 12-15 months.

Minister for Education Richard Bruton has said these new programmes provide opportunities and choice for school-leavers and other learners, and allow employers shape the programmes that best suit their workforce needs.

Mr Bruton’s action plan for education contains a commitment to enrol 31,000 people on apprenticeship programmes in the period 2016-2020, a near doubling on current activity.

Parents’ “obsession” with ensuring their children progress to third-level education has been cited by some observers as a key reason Irish workers are among the most overqualified in Europe for the jobs in which they are working.

Latest figures show that about one in three workers in the State are at least one educational level above the international norm for the jobs they are in.

This is the highest rate in the EU and almost twice the level of countries such as France, Sweden and Finland.

Michael Moriarty, general secretary of Education and Training Boards Ireland, which runs much of the Irish further education sector, told The Irish Times last year that too many students were attending third level.

“Many are going too early to third level or shouldn’t be there at all in the first place. That’s clear in the attrition rates in some college courses,” he said.

Mr Moriarty said there was a “misplaced snobbery” among many parents who were “obsessed” with sending their children to higher education regardless of their talents.

However, Dr Graham Love, chief executive of the Higher Education Authority, has said it is a great achievement that so many Irish school-leavers are going to third-level.

Dr Love has also said many graduates may be “overeducated” for their jobs in the short-term, but their qualifications may become more relevant later in their careers.