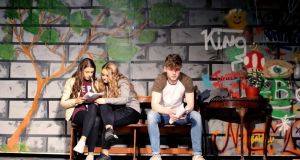 Rehearsing for ‘North by Northside’, a play based on the writings of Milo Smith, who was a student at Castleknock College, are Jessica Storey, Leah Kavanagh and Sean Peace 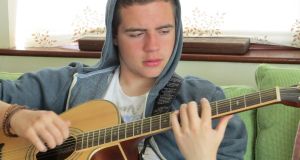 Milo Smith, a student at Castleknock College, who died on the final day of his Leaving Cert exams, in June 2016 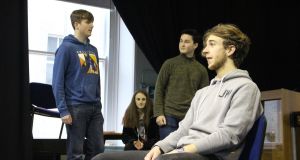 Rehearsing for ‘North by Northside’, a play based on the writings of Milo Smith, who was a student at Castleknock College, are Ciaran O’Byrne, Katie Duggan, Sean Griffin and Brian Briggs

Milo Smith, a student with ambitions of a career in theatre, fizzed with ideas for mockumentaries, musicals and plays that he wanted to produce.

He never got to see his ideas brought to life. Smith was diagnosed with cancer twice.

He survived the initial diagnosis, but died on June 24th, 2016, the final day of his Leaving Cert exams.

On Wednesday night, teachers, friends and former classmates at Castleknock College gathered to perform a play based on his writings.

The result, North by Northside, is a production that veers from urbane rom-com to modern-day fairytale and back again as northside scoundrels and southside socialites all take a hit.

“This project is an homage to Milo and the time we spent together,” says teacher Cormac MacGabhann.

During his time at Castleknock College, Smith took part in a variety of musicals and different dramatic productions.

He had ambitions to act on bigger stages and to explore his creativity as far as he could. His illness cut those plans short.

“From what I could see, Milo dealt with his illness with stoicism. He was preparing plans for when he would leave St James’s. He was going to do a barista course, having accepted that he would have to defer his course in Trinity,” says MacGabhann.

“He was not defeatist. He was ambitious and creative and unerringly positive.”

In September 2017, a group of Smith’s classmates, friends and teachers started meeting on a weekly basis.

The idea was to take one of his many ideas from concept to reality and to present a version of his vision with humour, honesty and dignity.

On Monday, a special performance of North by Northside was held for Milo’s family and friends; the final performance was on Wednesday night.

It has raised €2,000 so far, which will be donated to Don Bosco Care, a charity chosen by Smith’s parents.

“We laughed, we cried and afterwards reminisced about the time we had shared in Castleknock College and the young man who had brought us together on that night.”

He said the young cast, crew and wider team involved in the project have been passionate advocates of the play and contributed to putting together an occasion to be proud of.

The opportunity to fulfil the full extent of Smith’s talent was taken away from him, says MacGabhann , though not completely.

“The play represents part of that journey that he was not allowed to take.”