Balancing the scales: Can the legal profession open itself up to greater diversity? 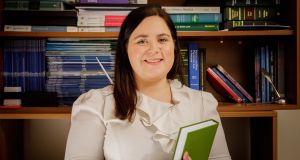 Sinéad Nic Ambróis, (29) is a single parent who is training to be a solicitor at William G Henry Solicitors, Emmet Street, Ballymote, Co Sligo. She is taking part in a flexible learning programme which is boosting numbers in law from under-represented backgrounds. Photograph: James Connolly

The young Donegal woman studied law at Letterkenny Institute of Technology, where it was all plain-sailing until the end of second year when she found out she was pregnant.

With support from her family and the university, she sat the exams a month after giving birth to baby son Alexander in December 2014, and graduated with first class honours.

But, she wondered, how on earth would she pass the final hurdle to become a solicitor – the FE1 entrance exam – which requires students to train full-time at the Law Society of Ireland in Dublin’s Blackhall Place?

“It could be overwhelming trying to juggle all the commitments,” says Nic Ambróis, now a 29-year-old single parent.

“At times I doubted myself and whether I should continue with the FE1 exams, as I did not know practically how I would attend Blackhall with a small child, or how I could afford to live in Dublin while there.”

She was scrolling through Facebook late last year when she saw an ad for the Law Society’s new “hybrid” professional practice course, starting in January 2020.

The hybrid course would combine online lectures with face-to-face tuition. It was created to facilitate those who were blocked from training at Blackhall, due to socio-economic issues such as childcare commitments, or being unable to afford to leave a full-time job, or not having the financial wherewithal to travel from the furthest parts of Ireland to the capital for the time required.

For Nic Ambróis, it was the answer to her prayers. “I was so deliriously happy when I heard it was starting. I assumed the course would not be available for years.

“The hybrid means I can work and qualify as a solicitor without disrupting my son’s life by having to move to Dublin.

“It feels surreal to be at Blackhall. I will qualify in January 2022. There were many moments since I decided to go down this route that I thought I wouldn’t get to this point, but I can finally say I am living my dream.”

The genesis of the hybrid course was a review of solicitors’ education called the Peart Commission, conducted by recently retired Court of Appeal Justice Michael Peart, with the advice of an expert panel.

It made recommendations for the future of solicitor education and training in Ireland, including increasing access to the profession by allowing for “blended learning”. In general, it means students are on site once a month over a weekend, in addition to online learning.

The Law Society says it shows how the educational landscape has changed from a position of “talk and chalk” to one where technology has enabled greater flexibility without compromising standards.

The initiative came from Dr Geoffrey Shannon, lecturer and expert in child and family law, and deputy director of education at the Law Society.

Shannon explains that the demographic profile of the hybrid students is noticeably different – it’s older, and has a higher percentage of women and regional students.

“It is unique: it demonstrates the Law Society’s commitment to diversity. The only way we ensure we have a more diverse profession is by ensuring we change our structures to make them friendly to those who would not normally have access to it at their disposal. I believe passionately it is greatly enriched by diversity,” he says.

“I know myself as someone who came from outside Dublin [Galway], I found it challenging to come to Dublin and the costs attendant on the course and the cost of living. This will open up the profession further to applicants of socio-economic disadvantage and to me, that is a key selling point.

“I feel this is an opportunity to provide those from disadvantaged backgrounds with a second career option. That’s not just good for the Law Society, it’s good for society,” he says.

Shannon says the Law Society is trying to develop a professional legal education that is “forward-reaching, learning-oriented and quality-assured”. This, he says, involves fundamental change and “completely reconfiguring” how to become a trainee to accommodate the needs of vulnerable citizens who want to become solicitors, and who will make excellent solicitors. “It’s all about flexibility.”

Shannon says he was was determined Peart wouldn’t be a “talking shop”, with the report gathering dust on a shelf.

Regulatory change was required for some of the recommendations in the report – which was one of the biggest challenges. A new policy in the training contract allows solicitors’ practices to pool together to take on a trainee, with two or three firms giving them a few days’ work each week.

This way, apprenticeships could be achieved in the regions; when traditionally, they were almost always provided by bigger firms in the capital. On the hybrid course, 55 per cent of traineeships are outside of Dublin, due to the student demographic.

“That’s the part that broke my heart! We needed regulatory change to achieve that and it was signed off by the Department of Justice. It had to go to the top, to the Justice Minister. So it was on the statute books last year, which made it possible to commence the course in 2020.

“I’m incredibly proud to be part of it, and it’s incredibly exciting. The real beneficiaries are those on the course.”

Director general of the Law Society Ken Murphy believes it is only really now – in 2020 – that the course is possible.

He says the hybrid facilitates those who passed the FE1 entrance exam, but found their next step to qualify blocked by social factors.

“There are those who would have then found it much more difficult to pursue their ambition to become a solicitor or been unable to do so. But this innovative development removes the barrier.

“The hybrid course is part of an expression of commitment to open up the profession. It was a somewhat limiting factor that you had to leave full-time employment, and that limitation has now been removed.

“This is without compromising the excellence required of everybody who will attain the status of solicitor.”

How do get selected to take part in new flexible Law Society courses?

There are 46 students on the first professional practice course/ hybrid, which officially started in January 2020.

It is a more flexible route into practice that does not include the requirement to be on-site at the Law School for a substantial continuous period.

“Blended learning” is delivered through incremental release of lectures in play on demand mode, in conjunction with on-site face-to-face tuition through weekend sessions and two immersive week-long sessions.

The same two-year in-office training requirement applies, but the trainee may be able to accrue credit for in-office work time completed prior to, or during, the hybrid.

A total of 55 per cent of those on the course is over the age of 30 and two-thirds are female.