Ask Brian: The reforms are built around eight key skills deemed crucial to prepare young people for the modern world 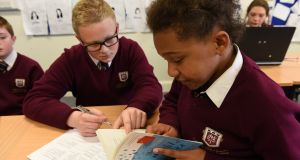 New Junior Cycle reforms are aimed at acquiring key skills such as working with others.

My eldest child started secondary school last September and I am completely confused over the changes currently under way in the Junior Cycle. Can you throw some light on this for me?

Since September 2014, students taking the Junior Cert in Ireland have been transitioning from the exam structure which you experienced as a child, to the revised structure.

This is built around the acquisition of eight key skills identified as central to preparing your son to live fully in the world.

They are: being literate, being numerate, communicating, managing myself, staying well, being creative, working with others, and managing information and thinking.

Alongside the subjects you experienced as a child, your son will be taking a new subject titled “wellbeing” for more than four hours a week, which incorporates what you knew as SPHE, CSPE, and PE, with an added element of career guidance, delivered in modular form over the three years of the programme.

The first traditional subject introduced in this revised structure was English, which was examined under the new specifications in 2017.

Many more have been added since. Some of the latest to join include maths, home economics, history, music and geography.

This final written examination in all subjects will be at a common level, apart from English, Irish and maths, where there will be two levels (higher and ordinary) available.

Achievement will be recorded using a set of grades. These State-certified grades will first be reported by the SEC in provisional form in September following the end of third year.